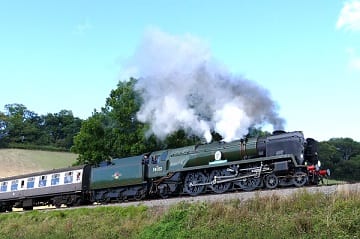 The West Somerset Railway’s Autumn Steam Gala is always a major event, attracting visitors from all parts of Britain and some from further afield.

This year’s event, being held between September 27th and 30th promises to be another popular occasion.

Taking as its theme “Cross Country Trains in the Days of Steam”, the four days will recall such trains as “The Cornishman” (Wolverhampton to Penzance following the tracks of the Great Western Railway), “The Devonian” (Bradford to Paignton) and “The Pines Express” (Manchester to Bournemouth, including the Somerset and Dorset line). Ten steam engines will be in action, all bar two from classes of locomotives that headed those trains and other similar services.

The largest locomotive at work is a Rebuilt Bulleid Light Pacific, 34046 “Braunton”, which is currently running in the guise of 34052 “Lord Dowding” to mark the 100 th anniversary of the RAF (Sir Hugh Dowding was commander of Fighter Command during the Battle of Britain).

British Railways 5MT 73082 “Camelot” will be making its first ever appearance at the West Somerset. Great Western interest will be maintained by 6960 “Raveningham Hall”, 7820 “Dinmore Manor” and 7822 “Foxcote Manor”.

Somerset and Dorset 7F 53808 was built as a heavy freight engine, but could be seen at the head of holiday trains in the 1950s and 60s betweenBath and Bournemouth. Two tank engines 41312 and 80104 will represent the locomotives that took cross country passengers to resorts such as Exmouth, and classmates of 41312 could be seen in North Devon.

The two “non Cross Country” locos will be 6046, an American engine built for service in World War 2 and the diminutive tank engine “Caledonia Works” which will be giving shunting demonstrations at Washford station.

In addition to the train services, there will be opportunities to go behind the scenes, and view more locomotives which are being restored. The workshops at Williton and Minehead will open their doors to the public on Saturday 29th and Sunday 30th September.

On Saturday 29th , authors Chris Austin, Richard Derry and Colin Howard will be signing copies of their books at Minehead and Bishops Lydeard stations respectively whilst the railway museums at Bishops Lydeard, Washford and Blue Anchor will be open on all four days.

The Taunton Model Railway Group will welcome visitors on Friday, Saturday and Sunday at Bishops Lydeard. There will be a model railway sale at Watchet station on the Saturday morning.

Nearly all trains will have a licensed buffet car ready to serve passengers. The “Quantock Belle” dining set will offer a range of meals including breakfasts (can be pre-booked from the Railway). There are refreshments at all stations except Doniford Halt.

Much more information will be found in a full colour souvenir booklet which costs £4.00 and can be pre-ordered from www.west-somerset-railway.co.uk or 01643 704996. The same contacts can be used for the purchase of rover tickets, giving a full day or days of travel during the Gala.