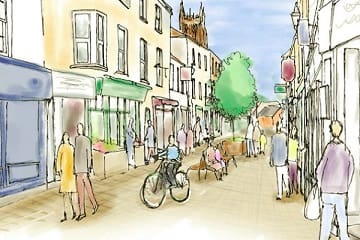 Plans to make St James Street more pedestrian friendly in the New Year have been paused to allow time for further consultation.

The Council had planned to implement the closure to traffic between North Street and Lower Middle Street in January following publication of the Traffic Regulation Order and statutory consultation period.

Although the TRO consultation generated 31 letters of support and only 19 against, local traders also organised a petition against the proposals which received just over 300 signatures.

The Council has listened to their concerns and will contact all interested stakeholders with a view to setting up a working group to move the proposal forward early in the New Year.

Cllr Richard Parrish, Executive member for Planning Policy and Transportation, said: “The Council is committed to making Taunton town centre more user friendly, improving the area for pedestrians and cyclists in line with its status as the first Garden Town in the South West. We aim to create a better environment for residents, shoppers and visitors, which will help attract investment and also allow businesses to thrive.”

“With this in mind, despite having received a great deal of support for the plan, we feel it is important to listen to the concerns of those that have signed the petition. We all share a common desire to act in the best interests of Taunton so need to work together on this.”

The public space improvement project was set to be completed in two phases with the closure of a section of St James Street followed by an 18-month trial closure of Hammet Street and East Street to all vehicles except buses and cyclists.

The Council will need to re-consult on revised schemes for Hammett St and East St so decided it makes sense to reconsider St James St in this further consultation.

Taunton Deane Borough Council and Somerset County Council will continue working on the details of the proposed changes with the appointed transport and urban design specialists WSP.