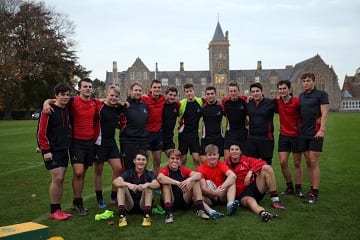 Neil started his rugby career at the age of 16 playing for Helston RFC before being selected for Exeter Chiefs. He has represented England in the 18s, U19s, U21s and England Students as well as receiving representative honours for The Penguins and The Barbarians.

Neil was part of the Bristol RFC team who won the championship in 2004 but despite having to leave Bristol through injury, he continued to play with a dual contract to Bath and Launceston.

Neil rejoined Exeter Chiefs in 2008 where he was an integral part of the team who won promotion to Premiership in 2010 and also won the accolade of Players Player of the Year award.

With over 200 games played for Chiefs and 74 for Bristol, Neil continued his rugby career in France where he played in the Top 14 for Oyonnax. Due to a severe injury, which meant instant retirement, Neil returned to England and is now enjoying his new role as the Forwards Coach for Taunton School.

Rugby is thriving at Taunton School with around 200 senior school students involved in playing the game from age 13 to 18.

Nic Sestaret, Director of Rugby said: “With his vast knowledge and experience Neil is undoubtedly a valuable addition to our coaching team.” Nic Sestaret oversees the rugby programme from Year 3 to Year 13 and has accolades of his own, including being a former professional Rugby Union player for 13 years,
playing in Premiership in France (Toulouse) and England (Exeter Chiefs).