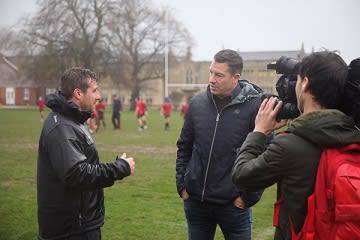 Taunton School has been chosen for a documentary after being identified as a fine example of English Rugby by French TV giant, Thomas Lombard of Canal+.

The Director of Rugby at Taunton School, Nicolas Sestaret, was approached by former French international player Thomas Lombard to feature on a programme about the English rugby pathway from Prep School through to the England Team. Nicolas first met Thomas when he was playing for Exeter Chiefs, and Thomas regularly interviewed him about the English Premiership.

The Canal+ TV team flew out to Taunton School to witness the excellent rugby coaching which runs alongside first class education.

Thomas Lombard explained how rugby is not taught in French schools, and instead, promising players are expected to join academies at 14 years old. They then continue their education within the academy setting, but only have the opportunity to focus on one sport. In complete contrast, Nicolas explained that Taunton School recently had a student who was the first team rugby captain, and played first team hockey and first team cricket.

Nicolas Sestaret said: “When Thomas saw first-hand what we do here, to say he was impressed is an understatement. The fact that we have strong links with the RFU and local academies such as Bristol Bears, whilst giving our students a full time education, is a ground-breaking example to the French.”

Thomas Lombard will also be visiting Oxford and Cambridge in December to see the progress beyond sixth form, by watching a varsity game.

Nicolas added: “In England, pupils don’t specialise in one sport until after sixth form. If a promising player wishes to have a contract in any academy, they need to be in education, either an apprenticeship or degree, therefore prioritising the academic side.”

He added: “It was great to see Thomas again, and show him our Rugby programme at Taunton School. We talked about the values of our rugby and how these create a positive impact on the student’s life.”

Thomas Lombard is pioneering this project by highlighting the quality of the English system, in a bid to change the process in his country. You can catch Taunton School on The Canal+ programme when it airs in March 2019, to coincide with the Six Nations.

Stay up to date with more Taunton News and you can visit the Taunton School website.