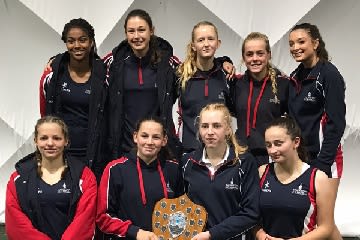 The Taunton School Under 16 Netball Team have qualified for the Regional Finals, after a highly triumphant County Tournament.

On Saturday, 6th October the U16 netball squad travelled to King’s College for the County Tournament. This is the qualifying tournament for the Regionals and National Finals.

The Taunton School team started the tournament with a strong win over Wells Cathedral 7-2 whilst still getting use to the wet playing conditions outside. Their next game was against Haygrove from Bridgwater who struggled against a strong defensive unit only managing to score 3 to Taunton’s 19.

The Taunton School team dominated the play in their game against Millfield putting them under pressure and resulting in a 3-3 score line at half time. The second half saw Millfield push ahead and win a close and contested game 4-6.

The Taunton team played a dominant performance against Huish Episcopi next winning the game. The next game against King’s Bruton was the decider for the place in the Regional Finals; neither team had lost to anyone else but Millfield and therefore the match result was the most important of the day. A determined and driven performance from the Taunton team in the second half saw them win the game 7-4. The last game of the tournament was against King’s College, where the Taunton School squad took a comfortable victory of 14-4.

Head of Netball at Taunton School Lisa Manley commented: “All players really gave excellent performances, with a real team culture. This tournament has enabled our players to learn some important lessons about the short game in netball; 7 minute halves makes a massive impact on how the game is played. I’m very proud of the girls and look forward to some exciting times ahead for this talented squad.”

The Taunton School Under 14 team who were also competing in the County Cup were unlucky not to qualify, missing out by just one goal.