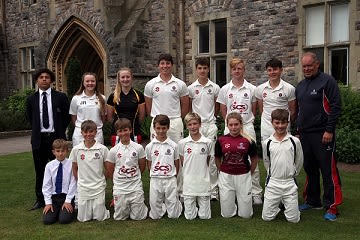 The world’s number one cricket magazine The Cricketer has published its Good Schools Guide 2019, featuring the top 100 schools, and Taunton School is one of only six in the Country to have both the Prep and Senior Schools included.

Taunton School is also the only one in the Somerset county town of Taunton which has both its Prep and Senior Schools listed.

The Cricketer magazine saw more than 350 schools submit entries to be included in the guide. All entries were judged against an extensive set of criteria, with all the chosen schools having outstanding facilities, fixture programmes and coaching.

Just this year, Taunton School has seen their Under 11 team reach the National Finals, after an unbeaten journey through the County and Regional Finals. The Under 12 and Under 13 teams also both got through to the County Finals. Across the Prep and Senior School, there are no less than 20 sides, including boys and girls, which can play at any one time; an outstanding number of teams for any school to boast. The partnership with women’s cricket team Western Storm is in its third year and support of local club Taunton Deane also continues. Coaching links with Somerset County Cricket Club remains strong. This summer, 13 boys and girls from Taunton School made County selection. Former England player Marcus Trescothick also has an active role at Taunton School as the Head of Cricket Development.

Pete Sanderson, Director of Cricket at Taunton School and former Somerset County Cricket coach says: “Of all of the achievements I’ve had the privilege to be part of during my career, getting recognition for both our Senior and Prep Schools in The Cricketer Good Schools Guide is a very proud moment for me.”

Pete added: “This recognition sums up the direction that cricket is taking here at Taunton School. We are going from strength to strength and with my colleagues Marcus and Shaun Winsor (Prep School), it is a great time to be involved in school cricket.”

The Cricketer magazine editor Simon Hughes commented: “This is a superb publication that serves both as an informative guide and as a tribute to all those teachers and coaches out there who are nurturing the talents of future club, county and international cricketers. I have been lucky enough to visit a number of school matches this summer, and am pleased to note that the standard of cricket, coaching facilities and enthusiasm for the game has been as high as I can recall.

“The competition to be included was fierce and plans are already in place to provide more in-depth coverage of schools’ cricket next summer. Congratulations to all of the schools included and please keep up the good work.”

As well as appearing in print alongside the world’s No.1 cricket magazine, the guide will also be made available on The Cricketer website from Friday December 14th.