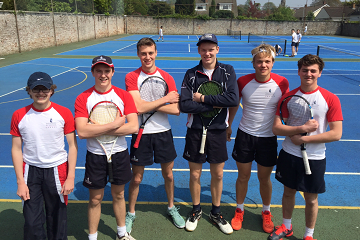 Tennis players from Taunton School enjoyed success as they secured league victories in the top divisions of the West Somerset Tennis Leagues in both the mixed and men’s leagues this month.

It is the third season in a row that the players have claimed the mixed trophy and is a triumph to claim the title in the men’s league, after finishing second last year.

Finishing on an impressive 72 and 73 points respectively, the School entered pupils from across different year groups to give them the opportunity to play against a wide range of competitors and gain a greater understanding of the sport at an adult level.

The leagues were competed against local clubs, where matches were played at home and away. A further victory saw the parents of Taunton School B team enjoying a win in Division 5.

Director of Tennis, Shaun Carroll, is delighted with the results this season. He said: “These leagues provide an excellent opportunity for pupils to get out and play different tennis against different players, which stand them in good stead for school matches”.