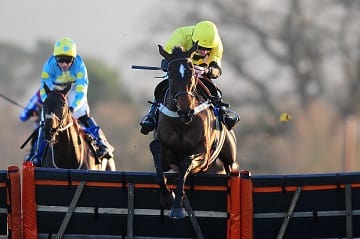 Taunton host the second of their Autumn Meetings on Thursday 29th November when the racecard boasts prize money of almost £53,000 and the action is due off at 1pm.

First to post is The Annual Membership 2019 Available Today ‘National Hunt’ Novices’ Hurdle Race over two miles and half a furlong.

Next up at 1.35pm is The Elizabeth Day Supporting Injured Jockeys Fund Novices’ Handicap Hurdle over three miles, which is the longest race on the card and has £9300 available in prize money.

The most valuable event of the day is The racinguk.com Steeple Chase (A Novices’ Limited Handicap) run over two miles and seven furlongs which goes to post at 2.05pm and has a very generous prize pot of £10,800 on offer.

The Racegoers Club 50th Anniversary Handicap Hurdle Race over two miles and half a furlong is next up 35 minutes later, with a first prize of over £5100.

The second action over the jumps course follows at 3.10pm when The Festive Fixture 13th December Handicap Steeple Chase over two miles and about five and a half furlongs goes to post.

The afternoon’s action concludes with the ROA/Racing Post Owners’ Jackpot Handicap Hurdle Race over two miles and about three furlongs.

A courtesy coach service departs from Taunton Railway Station two hours before the first race and returns from the course 30 minutes after the start of the last.

Racegoers are reminded that they can take advantage of the up to 20% discount offer that is available if they buy their tickets on-line in advance before 10am on the day prior to racing by logging onto www.tauntonracecourse.co.uk