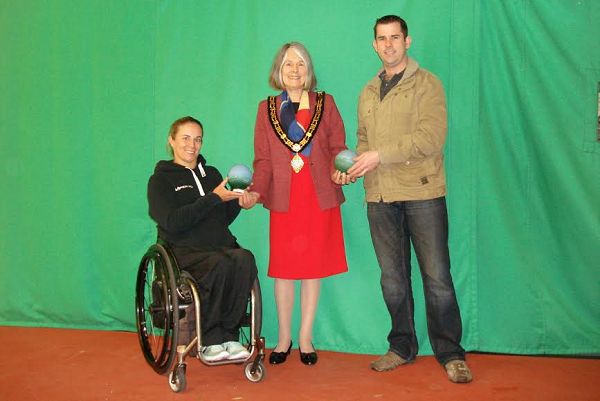 Local heroes Lucy Shuker and Ed Ling have been presented with commemorative globes to mark their medal winning achievements in the 2016 Rio Olympics.

Taunton Deane Mayor, Cllr Vivienne Stock-Williams, made the presentation on behalf of the Council at the Blackbrook Pavilion, after a civic ceremony was cancelled due to the Olympians busy schedules.

Lucy who trains in Taunton and Ed who lives in Nynehead both came home from the 2016 games with bronze medals. They were given a hand-blown glass globe made by local craftsman Will Shakespeare and engraved with a message from the Council.

Cllr Vivienne Stock-Williams said: “It was a real honour to meet them and congratulate them on their remarkable achievements. The Council is very proud of them both and is delighted to have them as role models for Olympians of the future.”

Lucy made history alongside Jordanne Whiley at the London 2012 Paralympic Games winning Great Britain’s first ever Women’s Wheelchair Tennis medal in the women’s doubles event, and the pair retained their Bronze Medal status at the 2016 Paralympic Games in Rio. She was also the first Brit to contest the wheelchair tennis events at all four major Grand Slams when she played in New York in 2013.

Lucy started playing Wheelchair Tennis in 2002 following a motorbike accident which left her paralysed from the chest down. She trains at the Blackbrook Tennis Centre and also at The Royal Berkshire Health and Racquets Club.

Ed Ling won bronze in the men’s trap shooting event at the Rio 2016 Olympics. He has also represented England at the 2004 and 2012 Olympics. The sport is something of a family obsession – his father coached him throughout his career, his wife Abbey is a three time British champion, and his brother Theo won bronze in the European junior championships. The family run a shooting school based at their working farm.