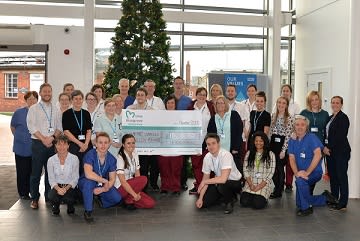 Musgrove Park Hospital has been given the best Christmas present after the £1 million target for a third MRI scanner was reached this week.

The community of Somerset has come together over the last year and a half to support this much needed MRI scanner, which is due to arrive at the hospital in Summer 2019.

Colin Drummond, chair of Musgrove Park Hospital, said: “This is terrific news for our patients throughout Somerset. On behalf of everyone at the hospital I would like to thank all our many supporters who have made this possible.”

“What makes it so special is that the bulk of the funding came from individuals and from a great number of local fund raising efforts. The warmth of community support is humbling and an inspiration to all who work at Musgrove – it makes us all the more determined to continue to give the best possible care to all our patients.”

The other charities at Musgrove Park have also been incredibly supportive. The hospital’s League of Friends, Somerset Unit for Radiotherapy Equipment (SURE) and Wellington Hospital League of Friends have collectively contributed £220,000 to the campaign through fundraising of their own.

The hospital’s charity, Love Musgrove, has asked people who are still fundraising for the MRI scanner to continue to send in their donations as any additional support will go towards further improvements to benefit patients who use the MRI department.

The campaign began in April 2017 when pressures on the current two MRI scanners were starting to have an effect on patient care. At full capacity seven days a week, less urgent patients had to wait longer for scans and some even had to travel as far as Bristol or Exeter.

Annie Maw, Lord-Lieutenant for Somerset and patron of the MRI scanner campaign, said it was fantastic news. “I have taken a close eye on the progress of the campaign since it was launched,” she said. The imminent arrival of a third MRI scanner at Musgrove Park Hospital is great news for the Somerset community.”

MRI scanners are important for many reasons. They are key to the diagnosis and monitoring of many illnesses and avoid the use of radiation as it uses a powerful magnetic field to produce detailed images. MRI can image any part of the body, but is most commonly used to look at soft tissue structures like the brain, spinal cord, muscles and the organs of the abdomen and pelvis.

The scanners are particularly effective in looking for tumours, and can show how deeply a tumour has grown into body tissue and whether it has spread.

MRI can show the heart and the large blood vessels surrounding it, and this is particularly useful for diagnosing motional heart defects, as well as changes in the heart muscle itself, following a heart attack.

Love Musgrove is the official charity of Musgrove Park Hospital, supporting the hospital as it treats over 450,000 people each year, in its emergency department, on its wards and through its outpatient services.

Although the NHS funds the hospital, the charity raises additional funds to improve its services, purchase state of the art equipment and continue to provide a positive environment for both patients and their families, and staff.