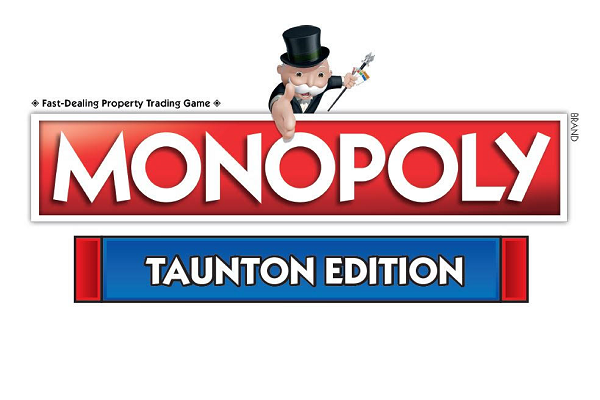 Taunton has won a Somerset MONOPOLY race by a ‘West Country mile’, it was announced today, Thursday (April 6th 2017).

The public has been voting all this year for one of five Somerset cities and towns to get its very own official MONOPOLY game for this Christmas. The other four in the race were: Weston-super-Mare – who came runner-up – Glastonbury, Wells and Yeovil.

Taunton now becomes the very FIRST city or town in Somerset to land its own MONOPOLY game.

The announcement was made at The Museum of Somerset on Castle Green by Natasha Rebuck from WINNING MOVES UK, makers of the new unique edition under official license from Hasbro.

Ms Rebuck read the result in reverse order. Weston was runner-up – Yeovil trailed in last. At the announcement there were very many MONOPOLY brand props including trademark top hats and giant MONOPOLY money.

From today for a month the Taunton public will be invited to suggest town landmarks to fill the edition. The Museum itself, where the announcement is taking place, is expected to make it onto the new game.

Other leading Taunton landmarks that could appear include the very green and lush Cooper Associates County Ground – home of Somerset County Cricket Club – which could land in the green section of the game. Also set to feature will be a shopping centre could land on the Oxford Street space and the racecourse on a Chance square.

She went on to add: “Very many of the landmarks in Taunton are extremely well known and loved. We will take all the suggestions on board and thank you to everyone who has joined in the MONOPOLY debate!.”

The game will see around 30 leading Taunton landmarks replacing the famous MONOPOLY addresses like Mayfair and Park Lane.

Very many of the Chance and Community Chest cards will be Taunton themed too.  One could send players back three spaces for getting stuck in Taunton traffic!

The game will be released in time for this Christmas (2017) and hit shop shelves this October.

Ms Rebuck went on to reveal that as well as the game showcasing the finest of Taunton‘s landmarks all of the MONOPOLY sets of two, three and four will be “exclusively” Taunton. The customised sets will span the world of tourism, heritage, arts, leisure, education, entertainment, travel, sport and other sectors.

She added: “The game will reflect the flavour and feel of Taunton and parts of it will be fun, yes. Everything is up for grabs. We are eager to hear from the public on everything.”

Votes and suggestions to: taunton@winningmoves.co.uk  or by traditional post to:  MONOPOLY Taunton Edition, Winning Moves UK, 7 Praed Street, London W2 1NJ.  Polls get underway from 00.01am on 6th April and close at 23.59pm on 23rd April (2017).