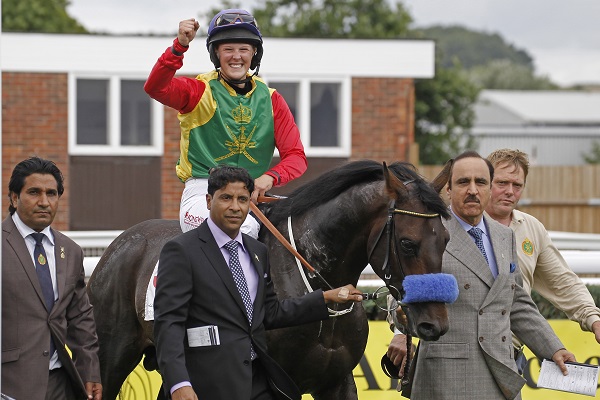 Mackenzie not only had a first win on her first ride at DIAR, but it was in a Pattern race, the Group 2 Emirates Equestrian Federation International Stakes. Whilst Brotherton, having been unplaced in the opening contest, scored later in the card on the handicap good thing Kayote, in the Roda Hotels and Resorts Premier Handicap.

After the race a delighted Mackenzie commented: “I’m so pleased, I’ve been riding Riyam at home and in a
racecourse gallop, as well as winning on him on his debut. He’s a fantastic horse and I couldn’t ask for more.

The plan was similar to Chelmsford, keep close to the main group and stay as straight as possible, though that wasn’t set in stone.

“He’s tough and he battles hard. He can be forgiven his first few runs in France which were on easier ground, as he was just learning the ropes, he had definitely come on for his run at Chelmsford and I think he’ll progress more from this too. As for her thoughts on DIAR and the rest of the ARO and Amateur season she said: “I’ve visited DIAR as a spectator for the last two years, it’s a day I look forward to every year, and to win on my first ride, well that’s just fantastic.

Racing with the Arabian Racing Organisation (ARO) has helped many an amateur and future professional jockeys career, with some well known names listed on the ARO history books such Tom Scudamore and more recently, Tom Marquand and Holly Doyle. One well known leading amateur who has come late to Arabian racing is nine times Champion Lady Amateur Flat Jockey, Serena Brotherton, who had her first ride under ARO rules last season.

Of her win she said: “I had a couple of rides last year and when I was second at Taunton in May, I thought I’d really like to ride a winner now. It was frustrating for Kayote’s owner, Keira Clarke who wasn’t qualified to ride him, but she told me exactly what to do and he was brilliant. He loved the ground and he tried.”

Sarah Oliver, Chief Executive of the Amateur Jockeys Association (AJA) said: “It is always pleasing to see hard work and dedication rewarded and this is certainly the case for Ellie who is riding in top form. Arabian racing is allowing her to demonstrate this at the highest level and it’s wonderful to watch her riding career flourish thanks to these added opportunities. Well done to Ellie on her first Group win – what an achievement!”

Of the victories for the other amateurs at Newbury she concluded: “It was great to see Serena Brotherton
victorious on her DIAR debut too. It was a wonderful day for our jockeys with David Turner completing a
winning trio of amateurs who showcased their skills by making these opportunities part of their racing calendars. Many congratulations to them all.”

Gemma Cobb, ARO Racing Operations Executive said: “ARO is thrilled for Ellie Mackenzie to win at Group level on her first ride at this meeting, beating Tadhg O’Shea in a driving finish, with Olivier Peslier in third. At 24, she has many more years of competition ahead of her. This is her fourth win since becoming the Racing Welfare Arabian Racing Jockey Ambassador at the start of our season and she is a credit to the sport.”

“It is also great to see established amateurs such as Serena Brotherton be rewarded for embracing Arabian racing, in this her second season to race under ARO rules. Congratulations are also due to David Turner, who has been riding with us for many years, as he secured his third DIAR win in the final race yesterday, having been second in the first race and third behind Serena.”

She concluded: “Arabian racing in the UK is unique in the way that it offers opportunities for amateurs to compete against the professionals and we are especially proud of Ellie Mackenzie whose career in racing began with Arabians. ARO is thrilled with how the day has gone, with our runners up again on last year, at 84 and despite the showers, the crowd was over 8,000 strong.

The series helps to promote lady jockeys worldwide by giving amateurs the chance to race against professionals on Purebred Arabian horses. All the jockeys taking part in the series will be invited to Abu Dhabi in November, with the winners of each stage lining up in the finals at Abu Dhabi Equestrian Club. Ellie took part in one of the earlier stages held in Bahrain in March, finishing fourth.