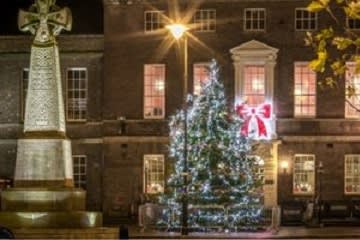 Christmas events will begin with a Winterfest celebration in the Town centre on Sunday 25 November with fairground rides, street performers, food and entertainment from 10am to 8pm.

At 6.30pm the focus will turn to the traditional Christmas tree outside the Market House which is sponsored this year by Langford Lakes, Taunton Farmers Market, Blackdown Financial, Wilkie May & Tuckwood, and Wheelers of Bridgwater.

The Mayor of Taunton Deane, Cllr Catherine Herbert, will switch on the Christmas tree lights helped by a community hero nominated by members of the public; plus the cast of the Wizard of Oz who are performing at the Brewhouse Theatre from 7-30th December.

Road closures will be in operation at East Street, Corporation Street, Hammet Street and North Street from 6am through to midnight with diversions in place.

Following Winterfest, the first late night shopping evening will be on Thursday 29 November when the Orchard Shopping Centre will have its’ lights switch on event.

The last late night shopping evening is Thursday 20 December, with some shops also opening late on Friday 21 and Saturday 22 December.

The Council is once again offering free parking in its car parks on the four Saturdays before Christmas. There will be no charge from 2pm in all Taunton car parks, with the exception of Kilkenny, on Saturday 1,8,15 and 22 December.

There will be a Christmas Craft Market in Fore Street from Friday 30 November to Wednesday 19 December, and carols around the bandstand in Vivary Park on Monday 17 December at 6.30pm.

Cllr Mark Edwards, Events Champion and Deputy Leader of the Council, said: “The Council is pleased to be working with the Winterfest organisers to co-ordinate the Christmas lights switch on in Taunton this year, and I am delighted that one deserving Taunton resident will have a chance to share the honour with The Mayor and cast of the Christmas show. People will see a mix of the traditional and the new this year. We hope that our free parking offer will encourage people to come into Taunton to shop and enjoy refreshments over the festive period.”

Details of all these Christmas events and more can be found on the Tone FM events guide.