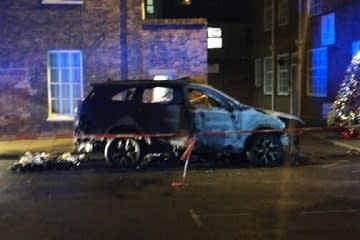 A West Somerset man has been charged with drink driving after his car burst into flames in Taunton.

A spokesperson from Devon & Somerset Fire Service commented; “One Fire appliance from Taunton was mobilised and upon arrival, crews confirmed there had been a road traffic collision involving a 4×4 and a parked motorcycle, both vehicles had caught fire and were well alight.”

“A second appliance was later requested for additional support and breathing apparatus, this also came from Taunton.”

“The vehicle fire was extinguished using 2 breathing apparatus wearers, 1 hose reel jet, 1 main jet and a thermal imaging camera.  Both vehicles were severely damaged by fire.  The cause was accidental.”

Police were requested to attend due to the nature of the incident.  Highways had also been requested due to the damage caused to the tarmac.

Jonathan Seager (aged 49) of Mill Farm Caravan and Camping, Fiddington, West Somerset is due to appear at Taunton Deane Magistrates Court on 10.01.2019