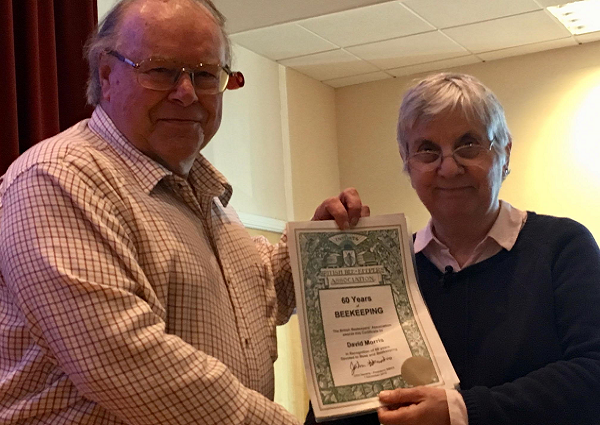 Taunton beekeeper David Morris’s 60-year membership of the British Beekeepers’ Association has been recognised with a presentation in front of nearly 200 beekeepers on Saturday (February 18).

He received a certificate from the Chair of the BBKA’s trustees, Margaret Murdin, at a lecture day run by Somerset Beekeepers.

David, from Halse, has kept bees continuously during this period and has been an active member of Taunton division, serving as President for three years, as well as the county association.

He said he finds the craft as compelling today as he did when he first started helping his father as a boy.

“What I find fascinating is our ability to work with an insect that, for all intents and purposes, remains a wild creature.

“Whilst we try and exploit some of their natural instincts hopefully, at the same time, we make their lives easier with some of our interventions.”

Over the years the challenges facing honeybees and other pollinators have increased as environmental pressures reduce forage and invasive species such as the varroa mite have made bees more susceptible to disease.

But he still anticipates the start of the season with optimism: “We must always hope that the new season is better than the last. It may be a forlorn hope, but it would be great if the thousands of dollars, pounds and euros being spent world-wide on bee research finally came up with a simple and cheap solution to the varroa mite and foul brood problems.” 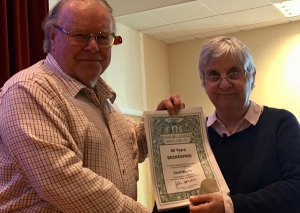