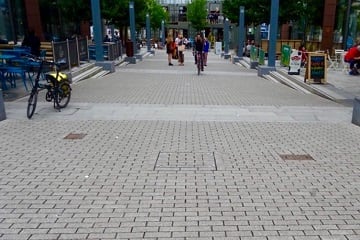 Ms Pip Sheard who will be presenting the petition said; “The Firepool development is a once in a lifetime chance to provide a high quality cycle link to Taunton Town Centre from the Station via the new proposed Boulevard. Borough Council officers tell us that cyclists will not be able to use the Boulevard unless walking. The alternative proposed route is not acceptable”

An alternative longer route for cyclists is proposed which involves four crossings at the NIDR and which bypasses the main area of activity (going past the car park). The photograph on our petition taken in Bristol shows how cycling can be accomodated in the context of the Boulevard.

Station Road is one of the 15 problem ‘hotspots’ identified by local cyclists in our 2016 survey. The Boulevard would enable some cyclists to avoid Station Road if heading to the town centre and beyond.