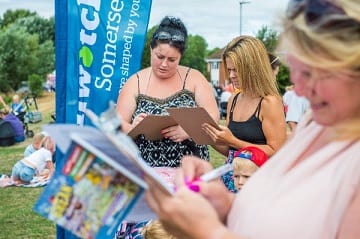 The county’s independent health and care champion Healthwatch Somerset is calling for the area’s NHS non-emergency phone line to provide better communication with the public.

Long waiting times, repetitive assessment questions and ‘robotic’ phone operatives were just some of the issues raised by members of the public when asked about Somerset’s 111 non-emergency phone service in a recent survey, carried out by the county’s independent health and care champion Healthwatch Somerset.

Despite two thirds of respondents saying they felt the 111 service did not meet their needs, 90 per cent said they felt they were treated with compassion, dignity and respect and a high proportion rated their experience as very good or good.

More than 650 people took part in the survey, which was carried out to ensure the public voice is used to help shape a new Integrated Urgent Care Service, being introduced by Somerset Clinical Commissioning Group in February 2019.

Staff and volunteers from Healthwatch Somerset visited events and community venues over the summer to capture people’s views on the 111 service. Some people said they liked the 111 service, as it provided reassurance and help in a time of need, commenting on how polite the advisors were.

Whilst other people reported being frustrated about the assessment questions, finding them irrelevant, lengthy and repetitive.

Emily Taylor, Healthwatch Somerset Manager, said: “There appears to be a lack of understanding about the relevance and importance of the assessment questions. We would recommend better communication with the public about the service and how it works.

“People also talked to us about waiting long periods of time for a call back from a medical professional. Many told us about not knowing when they would receive a call back. Some suggested that they could have been kept updated via a text message, email or an online app system. Where people were left too long, they often called 999 or went to A&E. Again, we would suggest better communication with people who are left waiting for a call back.”

Emily continued: “People often referred to the 111 phone operatives as robotic because they were following a script. Whilst people are happy that the service exists, there was a keenness that advisors be more willing to enter into a conversation about the issues and to be more flexible around the script. Additional staff training was mentioned on numerous occasions.”

Healthwatch Somerset Manager Emily Taylor added: “We know that it is important that people know what has happened as a result of them sharing their experiences with us. We are already working with commissioners to respond to the issues raised in this report. We will be sharing this report with key partners and will be presenting our findings at the Somerset Health and Wellbeing Board and NHS Local Quality Surveillance Group.”

The report can be viewed via this direct link: healthwatchsomerset.co.uk and will be sent to Healthwatch England, and a follow up meeting will be arranged with NHS Somerset CCG ahead of the launch of the Integrated Urgent Care service in February 2019.

A spokesperson for Somerset Clinical Commissioning Group said: “Somerset CCG welcomes the publication of the Healthwatch Somerset’s NHS 111 public experience report. We will be incorporating its insights and recommendations into local urgent care planning and the county’s forthcoming health and care strategy.

“Many of the issues raised, like the length of time it might take some patients to receive a call back after initially calling NHS 111, we expect to be addressed by the new Integrated Urgent Care Service for Somerset.  This will be up and running from February 2019 and will be provided by Devon Doctors Ltd.

“NHS 111 remains the essential number to call if you become ill after your GP surgery has closed or when you need medical advice fast, but it is not a 999 emergency. The number is free to call, available day or night and is still the quickest way to get timely access to health advice you or your family may need.”

Asthmatic Joanna had to wait 12 hours before speaking to a medical professional on the 111 line after gasping for breath.

Mum of one Joanna Boyer from Bridgwater had a nasty chest infection and was using a nebuliser but was feeling worse and couldn’t get her breath. She rang 111 a number of times and each time was promised someone would call her back within two hours. First time she rang after four hours of waiting to be told they had no record of her calling and that they would ring her back. This went on for 12 hours before she spoke to someone. In the end she went to her GP surgery and they sent her straight to A&E at Musgrove Hospital where she was treated.

She said: “I know the 111 service is very busy but having to wait for 12 hours for a response is not good when you feel ill.”  A similar thing happened when Joanna rang 111 after her 5 year old son was gasping for breath due to a chest infection. She called on the Sunday at 10pm and got a response at 6am the next day. She then went to her GP who sent the boy to Bridgwater Hospital to be treated.

Back in February this year, pensioner Marguerite Gill started to feel ill on a Sunday afternoon and rang 111 for advice. She said she felt quite poorly and frustrated by all the questions being asked over the phone. The operator said they felt she didn’t need to be seen that day by a doctor as she had previously been to the GP earlier that week and records showed nothing was picked up. She was advised to contact her GP on the Monday morning.

Still feeling unwell, Marguerite went to see a neighbour and straight away they said: “She looks white as a sheet and needs to see someone, this can’t wait!” Her friends took her to A&E and in the early hours of Monday she was told she’d had a heart attack. She stayed in hospital for a week and had stents put in.

Marguerite, who lives alone with her pet dog in Taunton Deane, said: “I just felt ill and wanted to see a doctor. To be told to make an appointment with my GP for the following day – I was just tired with it all. Thanks to my neighbours I got the medical help I needed.”

Ruth Hobbs from South Somerset is the director of the Somerset Parent Carer Forum. She was visiting a child at their family home when she noticed the father was showing signs of a stroke.

Ruth said: “I had just walked into this house and wasn’t completely sure what to do. The man’s speech was slurred, he was struggling to move one side of his body and he was in distress.

“I rang 111 and the operator talked me through the situation in a calm way and it was decided to get an ambulance to the house. They were amazing and through the help, advice and speediness of the 111 operator and the ambulance service – this man was able to get the care and attention he needed.

“I would have no concerns in calling 111 again, I have full confidence in this service.”

In September 2016, retired office worker Rwth Hunt started to feel unwell, having bouts of sickness and not being able to keep any food down. She rang 111 and described her symptoms to the phone operator who got a doctor to call Rwth back. The doctor decided to send Rwth to Musgrove Hospital for tests and an ambulance was sent. Rwth said: “I just had enough time to get my dog to the neighbours and then when I returned the ambulance was waiting.

“They diagnosed an umbilical hernia and I was operated on that same night. If it hadn’t been for 111 and them taking me seriously, I don’t know what would have happened. They set everything in motion and I was really impressed with how it all worked. They possibly saved my life.”