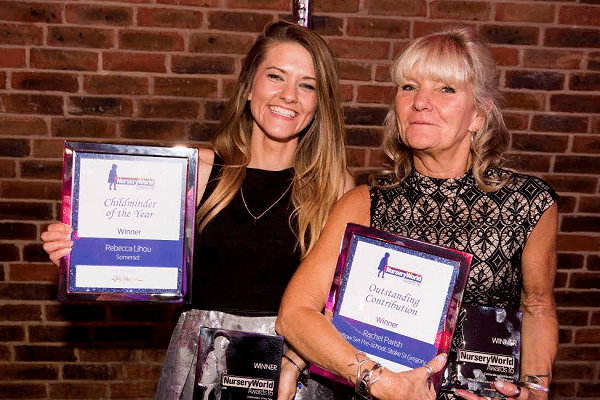 Rachel Parish, a nursery manager, and Rebecca Lihou, a childminder, were both nominated for the prestigious awards by the Early Years Team at Somerset County Council for their dedication to the children and the families they work with.

After being shortlisted to go through to the finals earlier this year, Rachel clinched the “Outstanding Contribution” Award, while Rebecca was crowned “Childminder of the Year” at the glittering ceremony in London, hosted by the national publication for the early years sector.

Rachel and Rebecca’s nominations were also supported by many wonderful and heartfelt testimonies by parents and colleagues from across the County.

Cllr Frances Nicholson, Cabinet Member for Children and Families, said: “Congratulations to both Rachel and Rebecca for this well-deserved recognition. They were both nominated because they go above and beyond their normal duties as early years providers. Both have contributed so much to their profession to make sure the voice of early years professionals is heard throughout the local authority and across the county, playing a role in shaping the early years education vision for Somerset.

Rachel is the manager of The Willow Set Pre-school, Sun Up and Sun Down Club and Moor Fun Club which are all based at Stoke St Gregory Primary School. All three provisions give parents living in a rural community the opportunity to return to work or take up training as well as giving children the best play and learning environments.

Rebecca Lihou is a registered childminder and also the Lead Childminder for Yeovil. As Lead Childminder she organises local network meetings and she supports both new and existing childminders to keep up to date with changes in legislation and in practice. This is all in addition to her normal duties of running her own childminding business.

You can read more about Rachel and the reason she won here: http://www.nurseryworld.co.uk/nursery-world/other/1158994/nursery-world-awards-16-individuals-outstanding-contribution

You can read more about Rebecca and the reason she won here: http://www.nurseryworld.co.uk/nursery-world/other/1158992/nursery-world-awards-16-individuals-childminder-of-the-year