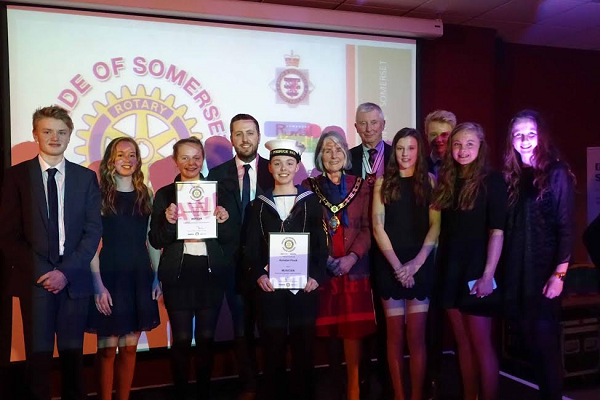 The incredible achievement of seven 13-year-old Prep School pupils from Taunton School has been recognised with a Pride of Somerset Youth Award after they swam the English Channel for charity.

Furthermore, 17-year-old sixth former Annabel Flook also received an award for becoming the Lord Lieutenant Cadet, in recognition of the high level of commitment and leadership.

Emma Hounslow, Emily Lawton, Skyla Coate, Ollie Halliday, Imogen Childs, Jonny Cole and Annabelle Lewes took up the challenge of a lifetime in September last year, by swimming the relay of 22 miles across the Channel in just 15 hours.

They went toe-to-toe with the elite of the British Military and came second after being pipped by the Royal Marines, who were just 3 minutes ahead, in the sprint for the shore just before midnight on 19th September. The pupils beat the staff team by a substantial 50 minutes. For the last 200m all children swam to the shore together and were euphoric that they had made it.

To be recognised with a Pride of Somerset Youth Award is very fitting, as the courageous seven raised a considerable £13,700 for the Royal Marine Charity.

They showed tenacious commitment to the massive challenge, undertaking a rigorous training programme over the 12 months leading up to the swim. Every week they went open water swimming at Lyme Regis, Brixham and Clevedon and training with Taunton Deane Swimming Club and at the Wiveliscombe Lido. Furthermore, in October 2015, they swam 2.5 miles across The Solent from Portsmouth to the Isle of Wight, where they set some of the fastest times ever recorded and raised £16,000 for the spinal charity Aspire.

The children all attended the ceremony at Taunton Conference Centre, on Friday 17th March. Emma said “We are really proud to be amongst other great children.” Emily added “We are humbled to hear their fantastic stories of fundraising and determination.”

Annabelle added “It was a really special evening and I was so impressed with the achievements of such young people”. Skyla also remarked “I’m really proud that all my friends at school had supported me in fundraising.”

The race began at 9am on 19th September 2016 and they swam in relay, taking an hour each at a time, from Shakespeare’s Beach to Cap Gris Nez. It ended in the early hours of the following morning in the dark on the shores of France. The teams were spurred on after receiving messages of support from Olympic swimmer Rebecca Adlington, endurance adventurer Sean Conway and the world record holder for swimming the English Channel, Trent Grimsey.

Hamish McCarthy, Taunton Prep School Head of Geography, who set the challenge and trained the pupil team was understandably emotional after the race, and when asked said: “My boys and girls were magnificent and showed courage well beyond their years. Suffice to say that they were more courageous than most military teams I have taken across; none hesitated, none gave less than their best and all showed the selfless commitment that make great teams. They are all a great testament to what Taunton Preparatory School nurtures and develops.”

Hamish added: “To see them win a Pride of Somerset Youth Award for their efforts raising a huge amount for charity by undertaking a perilous challenge is just superb. They truly deserve it.”

So will the team of swimmers be putting their feet up now and taking a well-deserved rest? Not likely; they are training hard for their next charity challenge which involves swimming around Jersey with an even bigger cohort of students.

The incredible achievements from Taunton School pupils didn’t finish there. The School’s CCF Petty Officer Annabel Flook, a current Sixth Form Cadet, was awarded a Pride of Somerset Youth Award after being recently selected to the highest rank of Somerset Lord Lieutenant’s Cadet. This rank is a national honour and a recognition of the high level of commitment, leadership and ability that all cadets are encouraged to emulate