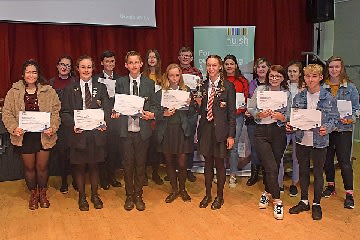 The College selected ‘Armistice’ as the theme for their annual creative writing awards which is for Huish students and pupils of partner schools to mark the 100th anniversary of the end of the First World War.

The Brunner Competition, run by Huish for partner schools, challenged pupils to write an imaginative, original short story, dramatic monologue, play script or poem, of their interpretation of Armistice.

In the twenty third year of the competition entries were received from The Castle School, Haygrove School, Heathfield Community School and The Taunton Academy. The Huish English department judged the Brunner competition and were impressed by the calibre and quantity of entries, awarding the Brunner Cup to Amy Lang (Haygrove School).

Huish students also got inspired entering their work into the exclusive Ross Paterson Creative Writing Award, offered by the trustees of the charity Get Home Safe which was set up by Helen Evans and her friend Charlotte Pitman, in memory of Helen’s nephew Ross Paterson, a former Huish student with a flair for creative writing.

Helen presented this year’s award and £100 prize to John Gilding for his entry, ‘History is Written by the Victors’.

The Lucas Cup for Artistic Writing challenged students to design a book cover, either hand drawn or digitally, for a commemorative collection of Armistice themed work. This year’s prize was awarded to Huish’s Rhianne Deaves, with Alice Russell from The Castle School swooping first prize in the partner schools’ section with her excellent contribution.

The judges of the Lucas Cup were Huish’s Head of Visual Arts, Tjark Schoenfeld and Graphic Design and Photography Teacher, Matt Williams.

At the Presentation Evening on 21st November, the audience heard extracts from the winning entries as they collected their trophies. The artwork of the Lucas Cup played on a show reel to create a spectacular backdrop to the proceedings.

Joseph Bennett, Assistant Principal, commented ‘The creative writing across Somerset schools and colleges is impressively high. We marvel at the creativity, variety and sheer craftsmanship of the entries we get. We have been delighted to hear feedback that even more schools wish to get involved next year”.