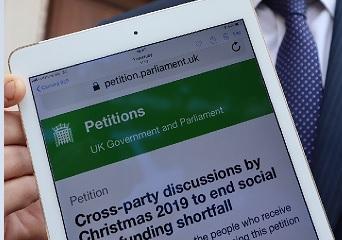 Leaders at Somerset County Council are asking the county and country to stand up for care and sign its parliamentary petition.

The petition calls for cross-party discussions before Christmas to end the national social care funding shortfall and it is part of the Council’s commitment to keeping the issue on the political and public agenda.

The Stand Up For Care petition has the support of all the County Council’s political party leaders and was launched at a meeting of the authority’s Cabinet committee by Leader of the Council, Councillor David Fothergill. He said the issue is a “national emergency that has to be a national priority”.

Hosted on the www.petition.parliament.uk website it can be found by following www.somerset.gov.uk/standupforcare Any British Citizens or UK residents can sign it and it’s hoped that people from across the county, but also the country, will use it to make their voices heard.

10,000 signatures triggers a formal response from the Government while 100,000 would mean it is formally considered for a debate.

“This is not just a Somerset issue, but we are proud to be the authority that stands up for care” said Cllr Fothergill. “The future of social care is perhaps the biggest and most important challenge facing the country as a whole. It urgently needs a long-term funding plan that will allow all local authorities up and down the country to provide the care and support people expect and deserve.”

“An issue this important needs political parties to come together to find a way forward, so I’m delighted that this petition has the support of all the parties and at the County Council. I urge everyone to go online and sign it. This takes just a few seconds but you could be contributing to change that last lifetimes.”

Earlier this year, the council was at the centre of a two-part Panorama documentary which made national headlines, highlighting the pressures and difficult decisions that come with meeting growing demand for social care at a time of limited funding.