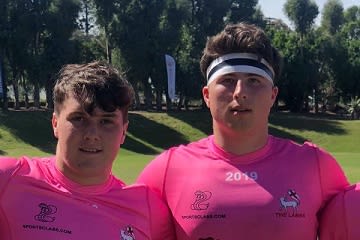 Sixth Formers Will Perry and Tom Walsh have recently returned from South Africa after taking part in a Rugby Tour with The England Lambs Rugby squad.

Will and Tom, both aged 18, were selected for the Independent Schools RFC, The Lambs, after showing promise at trials earlier in the year.

They played several games against South African teams, starting in Grahamstown and playing Kearnsey College and Stellenbosch Academy. Despite initially having some challenges with the heat and altitude, both Will and Tom played strong games, winning their last game convincingly.

They were lucky enough to also have the opportunity to visit Kwantu Private Game Reserve, Table Mountain and Robben Island with the squad during the tour.

Tom said: “It was great experience to play some very high standard rugby abroad especially in a country such as South Africa. There were tough opponents during our festival in Grahamstown – Kearsney who tested us the most. We were able to dominate in our final game leaving the tour with a win, playing fast and hard rugby. It was a brilliant opportunity to develop our skills.”

Will added: “It was an enjoyable tour and good to represent the national independent school boys’ team.”

Director of Rugby at Taunton School, Nic Sestaret commented: “This was a great opportunity for Will and Tom, and they should be congratulated on being selected for the tour and representing Taunton School so well.”