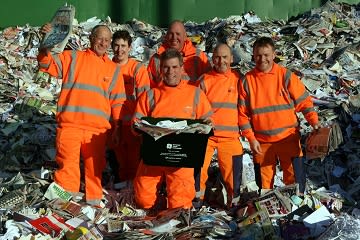 With every can, bottle and apple core they recycle this week, Somerset residents are marking a significant double anniversary.

It is two decades since all six Somerset councils – five districts and the county – formally agreed to jointly drive forward an environmental agenda to help households waste less, recycle more and save money.

It is 10 years since that agreement was transformed into the innovative Somerset Waste Partnership (SWP) as services were improved and streamlined to drive up recycling from barely 15% to its present 52%.

Since 1997, Somerset’s waste history shows how the commitment of residents to recycling has helped it pioneer new ways of working, with careful research and planning eliminating difficulties, enhancing services and improving performance.

These include launching the UK’s first major weekly collection of household food waste, and later ensuring that all collected food waste is consumed by billions of “burping bacteria” at Somerset’s £10m anaerobic digestion plant to produce power for the grid and farm compost to grow more food.

As the Sort It and Sort It Plus kerbside collection services rolled out across every home in Somerset between 2003 and 2011, new materials were added to recycling until around a dozen are now taken every week, while in a simple switch, rubbish pick-ups went from weekly to fortnightly.

And in another UK first, Somerset began tracking every tonne of recycling to establish an annual end-use register of where it all goes and what it may become. At the same time, new recycling sites were build, older sites revamped and new materials added, such as cooking oil and beverage cartons, so their recycling rates today average more than 75%.

The long serving chair of SWP’s governing Somerset Waste Board is Cllr Derek Yeomans, who said: “Somerset’s waste progress over the decades has been impressive, thanks to its resident’s commitment to recycling, giving us great confidence of continued improvements in the years to come.”

Cllr Yeomans issued an anniversary challenge: “As part of the celebrations, let us all take another step forward by ensuring that all food waste – every scrap – is recycled via our lockable brown kerbside bins to prevent any from heading to landfill in our rubbish.”