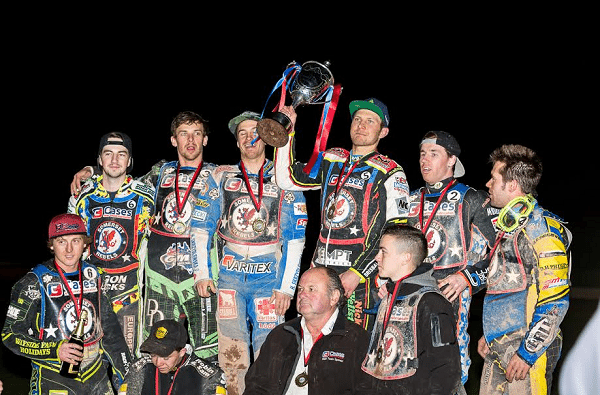 The ‘Cases’ Somerset Rebels are the 2016 Premier League Champions, the Rebels following up last night’s 2 point win at Sheffield with an 18-point home victory, to win by 20 points on aggregate.

The 2nd leg at Somerset’s Oaktree Arena started out as a nervy affair with Sheffield taking the fight to the Rebels, but gradually the home side started to pull away, they eventually making sure of the title when, somewhat fittingly, skipper Josh Grajczonek and Rohan Tungate, the Premier League Pairs champions, combined for a Somerset 5-1, it being the second time that Somerset have won the Championship crown, following on from their success in 2013.

“This is unbelievable, I’m almost speechless, and those who know me well will tell you that doesn’t happen very often!” said a delighted Somerset promoter Debbie Hancock afterwards, “nobody rated this team at the start of the season, and the boys were determined to prove them wrong.”

“They have had a great team spirit throughout and fully deserved their title, especially after having topped the Premier League table at the end of the regular season, but in saying that it takes two teams to make a final and all credit to Sheffield for making it a great final, and I am sure that their time will come.”

“We’ve got a great team manager in Gazza (Garry May) and he knows how to get the best out of a rider as this season has proved once again.”

“So let the celebrations begin, I’m sure that they will last long into the night and then continue on Saturday evening when we hold our end of season dinner and presentation night”