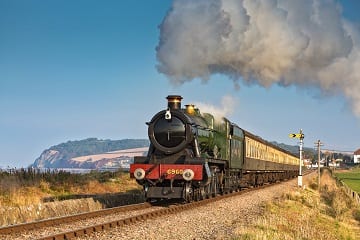 The West Somerset Railway is set to close for a temporary 3 month period after an inspection by the ORR (Office of Rail & Road).

The temporary closure starts from Jan 2nd 2019 until April 1st which equates to just 17 days of trade for the Heritage Railway.

Chairman of the board, Jonathan Jones-Pratt commented; “I proposed that the WSR should close for an extended period between January and April 2019 in order to allow us a period to re-group and seek to deal with as many of the ORR’s findings and recommendations to us for action as possible.”

“Our decision has been seen as a positive, responsible decision by the ORR. I believe it also demonstrates a proactive commitment towards safety by our adoption of a sensible and pragmatic approach to help us meet the 2018 requirements.”

“Whilst this may be seen as a very tough and unpopular decision by a number of people both within and outside the railway, it is one that was made with absolute responsibility, logic, reason and for the good of the railway. So, the decision was not foisted upon us by the ORR on safety grounds as some have incorrectly assumed and suggested, but we made a considered, pragmatic decision to extend our normally closed two-month Winter period after Christmas and New Year to the end of April.”

“I am working on the specific action plan direct with the ORR about their recommendations for change, but I wish to make it 100% clear that there has never been any major safety threat or unreported dangerous occurrence, and that we have received no conditions from the ORR on this topic.”

“The ORR has NOT issued either an Improvement or Prohibition Notice on the WSR, as evidenced by the fact that we are running ALL of our scheduled seasonal services in December. We are not closed!”

“Many of our Santa, Dunster by Candlelight and Winter Steam Festival trains are filling up well; some are already sold out, with overall sales better than last year, but we still want visitors and local people to back the WSR and we need more ‘bums on seats’ to try to sell these trains out before our fallow period.”

“In reality, this means that just 17 days of normal railway operations, plus four gala days, will be lost in this three month period. The Spring gala will not be running.”

The Chairman also added that the ORR letter to them runs to eight pages, there are actually only some five key points which they’ve raised with them for action following the inspection, many of which the board had already recognised as weaknesses and changes were already underway.

You can view the full Chairman statement.

Locals are reminded to stay away from the tracks. The lines are closed to passenger trains, but there will be a lot of works trains running around, the safety message still stands – don’t walk along any Railway Line thinking it is closed!