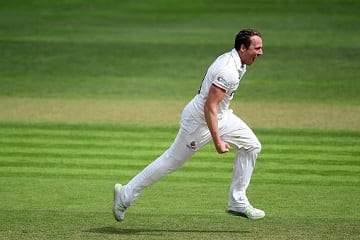 Somerset all-rounder Josh Davey has signed a new contract extension which will see the Scotland International remain at the Cooper Associates County Ground until at least September 2020.

The 28-year-old was one of Somerset’s standout performers during 2018 and claimed 34 Championship wickets at an average of just 25.35. He also claimed his first five-wicket haul for the Club when he took five for 65 against Yorkshire at Emerald Headingley.

After signing his contract extension Josh said: “I’m delighted to have extended my contract with Somerset. The Club is providing an environment in which I feel I can continue to develop as a player.

“I feel that my game is going from strength to strength and I believe that my best years are ahead of me.

“We have a strong squad of players and I believe that we will be pushing for silverware in all three formats in 2019. I’m excited to be a part of that.”

Somerset Director of Cricket, Andy Hurry said: “We are delighted with the progress that Josh has shown through 2018 and we’re really looking forward to seeing him develop even further over the coming seasons.”