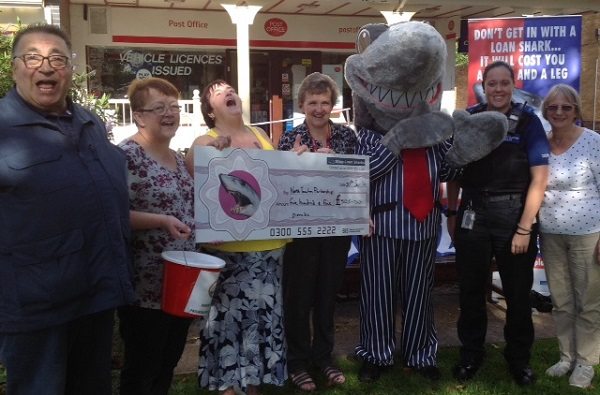 Cash confiscated from convicted loan sharks has been awarded to Go Create Taunton and North Taunton Partnership to help fund their community projects, which will assist in raising awareness of the dangers of loan sharks.

The England Illegal Money Lending Team, in partnership with the Devon and Somerset Trading Standards service, launched the ‘Your Choice’ initiative, to give residents a say in how money – from the proceeds of crime, taken from convicted loan sharks – is spent within the local community.

GoCreate Taunton has been awarded £1,250 to fund their startling Christmas tree proposal.

“We were over the moon to discover that our proposal for creative ways of fighting loan sharks had been successful. We can’t wait to start working with youth groups, the YMCA, the local credit union and partner charity, Stand Against Violence.”

Linking up with Moorvale Credit Union and Citizens Advice, The North Taunton Partnership has been awarded £505 to fund their awareness raising project, which will run between October 2016 and February 2017.

Within this period, the team will run numerous activities for children and local residents, which will aim to highlight the issues surrounding loan sharks.

“North Taunton Partnership runs the community centre, which is a valuable resort for local people offering support and guidance. It is fantastic news that we’ve received the grant from the IMLT. This highlights the importance of raising awareness of the dangers of borrowing from loan sharks.”

“It’s appropriate that money taken from members of the community through illegal money lending is now being used to benefit the community.

“The Somerset Your Choice scheme is a fine example of Proceeds of Crime Act being used for what it was meant, to help the very communities the criminals targeted in the first place.”

“Through this scheme the cash extorted by loan sharks is being put to excellent use. Thanks to everyone who voted or entered a bid- you have contributed to making a difference and tackling this crime in your community.

“Loan sharks are a scourge on society and cause harm and misery to their victims, but we are continuing to tackle them across the country. We would always urge victims of illegal money lenders to seek help by contacting us in confidence on 0300 555 2222.”

To report a loan shark: