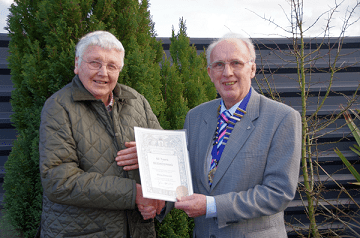 Somerset beekeeper Milns Priscott’s 60-year membership of the British Beekeepers’ Association (BBKA) has been recognised with a presentation in front of nearly 200 beekeepers on Saturday (February 17).

He received congratulations and a commemorative certificate from Ken Tredgett, President of Somerset Beekeepers’ Association (SBKA), at a lecture day held in Somerton on Saturday (Feb 17).

Afterwards Milns said he enjoyed beekeeping as much today as when he took up the craft and had no plans for retirement.

“I bee-keep with two friends and I really enjoy the commradie,” he said. “There may be more problems now than when I started, but I have no plans to stop!” he said.

Milns, from Milverton, has been Taunton division Chairman and President and Somerset’s Vice Chairman. He has given many beekeeping talks and demonstrations across the county and has been a very successful competitor at honey shows.

Over the years the challenges facing honeybees have increased as environmental pressures reduce forage and invasive species such as the varroa mite have made bees more susceptible to disease. This coming season beekeepers in the South West are on high alert for sightings of the invasive Asian hornet which wreaks destruction on honeybees and other pollinators.