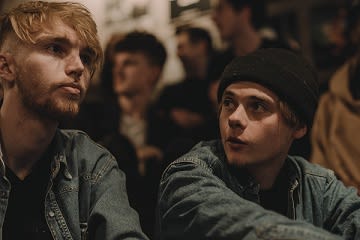 2019 is shaping up to be good year for Somerset Rock Pop band, Last One Home, who have been shortlisted for the prestigious Drake YolanDa Award.

The award was created to support emerging artists across the UK who express a commitment to their careers, demonstrate creative excellence and a drive to succeed.

Last One Home formed whilst band members Tom Westlake, Harry Lowndes and Phil Horler were studying Pop Music and Music Production at Richard Huish College. Since gaining their qualifications in 2017, the band have worked hard to pursue a career in Music.

At the end of March, they performed live to a panel of music industry experts at Cambridge Audio headquarters in London where the hundreds of applicants were whittled down to just 20.

The mix of genres and amazing talent made it an extremely difficult job for the judges to select their shortlist.

Last One Home will now meet press and music industry professionals and receive an award at the Celebration Concert in London later in April. There may also be an opportunity to perform at a special winter concert with a couple of headline acts.

Tom Westlake, singer-songwriter and guitarist said “Playing our music live to the panel and discussing our aspirations with them was an incredible experience. Things are moving really fast at the moment, as well as playing live shows, we are working on our next single and video which are due out in May and we are producing our first album which will be released in the summer.”

Phil Horler, drummer, said “To be recognised for a national award in London is a big boost for the band. Closer to home, we are playing many South West festivals this summer including the Godney Gathering, Chard Rock Festival and headlining a stage at Home Farm Festival. We also have shows coming up soon in Bristol, Weston-super-Mare, Bridport and Plymouth.”

Harry Lowndes, bass player said “In the last couple of years we have worked hard on our original music, releasing an EP and 4 singles, all of which can be streamed on Spotify. Two of the singles made the semi-final of 2018’s prestigious UK Songwriting Competition. Talking to the panel confirmed that we are heading in the right direction with our music. We must have made an impression because we are now being followed on our ‘lastonehomeofficial’ Instagram by X Factor winner Matt Cardle and MOBO award winner YolanDa Brown.”

Andy Wild, Course Manager of Vocational Music at Richard Huish College added “It’s fantastic seeing students pursue their ambitions and using the skills and knowledge they’ve built here, their determination has shown just what you can achieve with such commitment.”