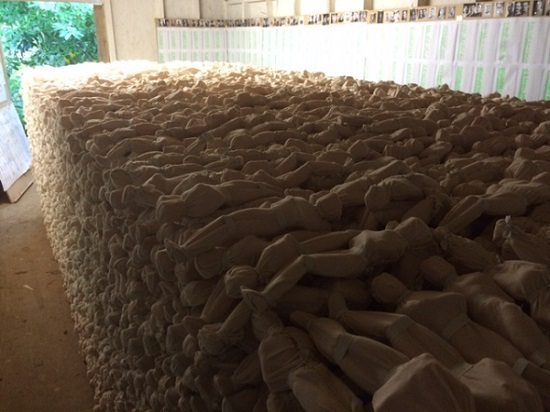 Somerset County Council’s Chair of Somerset Armed Forces Community Covenant Cllr Christopher Le Hardy is championing the work of a Somerset artist who has created 19,240 wooden shrouded figures to represent each of the soldiers that died on the first day of the Battle of Somme.

To mark the centenary of WW1 artist Robert Heard from Watchet handmade the figures that will be displayed in an exhibition taking place from 1-7 July at Northernhay Gardens in Exeter.

Each of the 19,240 soldiers who died during the first day of battle have been represented by a 12 inch figure, wrapped and bound in a hand-stitched shroud and arranged in rows on the ground. The purpose of this work is to physicalise the number of men lost, and to illustrate the enormity of the horror which unfolded.

Artist Rob Heard began the project on his own in December 2013, making 500 prototype figures to see what the visual impact of that would be and to see if he could get anyone to support his project. Since then he has been concentrating on successfully creating partnerships and gathering support to make the project happen. In early December 2015 Rob began the arduous process of making the rest of the figures to reach his target of 19,240 in time for the public display of the artworks on the centenary of the Battle of the Somme on the 1st of July 2016.  He has spent over 5,500 hours of labour to create the display.

During the creation process Rob referred to a list of names of all of the British soldiers who fell on the first day of battle.  Each figure is associated with a name so that each soldier is individually acknowledged and remembered.

Rob Heard explains; “As I worked my way down the list, crossing off one name each time a soldier was created I was able to reflect on their individual experience. I created the figures unaided, cutting and hand-stitching their calico shrouds, covering and binding them and as I worked I began a ritual of creation, remembrance and personal introspection.”

“The soldiers took on their own form, twisting and bending into their own unique shape – not only representing the dead – but death itself,” Rob adds.

Cllr Christopher Le Hardy said; “The sight of the figures both individually and collectively presents a poignant and provocative experience for the viewer, and allows for a moment of reflection about the physical reality of the war. The exhibition in Exeter will take on a space the size of a football pitch which brings home the enormity and scale of the lives lost in just one day. I urge everyone to visit the shrouded figures if possible so we do not let these men go unremembered.”