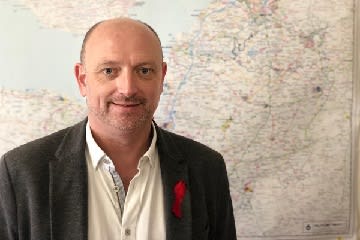 A charity which delivers support for people affected by HIV in Somerset and supports thousands more by providing sexual health outreach support has had its contract in the county terminated.

The Eddystone Trust, which has offices in Taunton and provides services across the county, has been told by Somerset County Council that its contract to provide specialist support services will end this month (March 2019.)

The Trust says it is concerned that the 140 people with HIV who it works with and who use its independent, non-judgmental services for support and advice on health, housing and employment, will not know where to turn. Last year it worked with more than 6,000 people across Somerset providing sexual health outreach support.

Despite holding a brief public consultation just before Christmas, throughout which assurances were given that all the services would be maintained, the charity was recently informed that nearly all Targeted Prevention Services as well as a number of others, will no longer be provided. The council has still not informed the public what services will continue or which partner organisations will deliver them.

Andrew Evans, Director of Operations and Finance at The Eddystone Trust said: “We are deeply concerned about the impact that ending this contract will have on the people we support; people who can’t access sexual health services through established health providers. We don’t just provide practical advice and support. Our staff are trained to cover broader issues like housing, employment and mental health.

“Ending this activity will significantly reduce the reach and effectiveness of these services and could leave thousands of people in Somerset without ready access to sexual health promotion, advice and HIV support services. We were initially told that there would be no changes in service provision, but we now know this not to be the case, with quite a number being cut.

“Many of the people we work with are very upset and distressed by this upcoming change. Having HIV is a life-changing event and requires specialist knowledge, skills and dedication of highly-trained staff who know and empathise with the people they support.

“Service users have expressed concerns to us about the future of the service, and we want to provide them with answers, but are currently unable to do so.”

The Eddystone Trust has been running since 1986 to challenge the stigma, discrimination and misinformation associated with HIV and sexual health, and works tirelessly with people – many of them vulnerable – who are affected by HIV to improve their quality of life. Its contract has been in place with Somerset County Council since 2016, but the Trust has provided services in the county since 2008.

Andrew added: “It’s not just those with HIV and their carers who will be affected by this change, but the thousands more who we educate with our programmes around sexual health and wellbeing, and STI prevention.

“We really want to support our service users and ensure this vital support is maintained.”

South West MP Ben Bradshaw, a member of the Government’s Health and Social Care Select Committee, who is also a patron of the trust said: “I have seen the amazing work done by The Eddystone Trust staff. The Trust provides a lifeline to people with HIV and others who are at risk of sexually transmitted infections. Those who access the trust’s service deserve to be kept fully informed about future provision and I sincerely hope a way can be found for this support to continue.”

Lindsay Pickering (60) from Taunton was diagnosed with HIV in 1996 and has been supported by The Eddystone Trust since it began providing services in the county. He said: “Eddystone have been there for me during my most difficult days – when I had come to terms with the fact that I was dying, the medication and its devasting side effects.

“My support workers’  knowledge is incredible and the practical advice and support for my mental wellbeing they have provided has been invaluable. I simply can’t see any other local government agency being able to do what Eddystone do. They go above and beyond for all of us in a way that helps us learn how to manage things for yourself. But if you stumble, they will be there.”

Lindsay, who now takes 54 tablets a day to combat HIV, diabetes and vascular dementia, both brought on as side effects from early medication, said he was devastated when he heard the contract for services was being cancelled.

“I feel as if a rug has been pulled from under me. All the old feelings of fear, insecurity and how you’re going to cope have come flooding back. Our vital support will be gone and I feel as if the council think of a us as a commodity that they can just get rid of. I just hope we can fight to change this decision.”