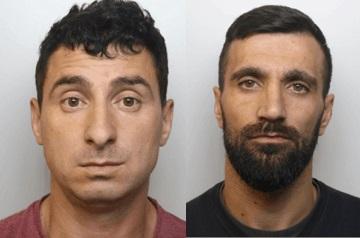 A pair of Romanian truck drivers have been jailed after they were caught siphoning fuel at Taunton Deane Services.

Ilie Dobrescu and Ion Stoian have each been sentenced to a total of 18 months in prison having been caught stealing fuel from two lorries in Taunton.

The truck drivers confronted the two men – Dobrescu 36 and Stoian 31 – who were using pipes connected to their own 44 tonne Romanian HGV before the Romanian pair fled from the scene.

Avon and Somerset’s Road Policing Unit located the lorry which Dobrescu and Stoian were travelling in at speed and safely stopped the lorry before arresting both men.

A multi-agency investigation involving Avon and Somerset police officers, staff and the Driver and Vehicle Standards Agency (DVSA) found the lorry to be carrying thousands of pounds in cash and hundreds of secreted fuel.

Further investigations also uncovered the use of a tachograph electronic data record – a radio-sized device fitted on goods and passenger vehicles which digitally records various types of driver and vehicle data such as journey distance, speed, driving time and driver’s activity – and magnet which alters tachograph records. The lorry was also found to have serious defects and was prohibited from being driven.

Dobrescu and Stoian were both charged with two counts of theft from a motor vehicle; producing a false record with intent to pass it as genuine to an inspector; and possession/control of an article for the use in fraud.

Both men pleaded guilty at Taunton Magistrates Court on 10th July and were remanded in custody until they were sentenced at Taunton Crown Court last Friday (2nd August).

The pair will be deported upon release and are disqualified from driving for 21 months.