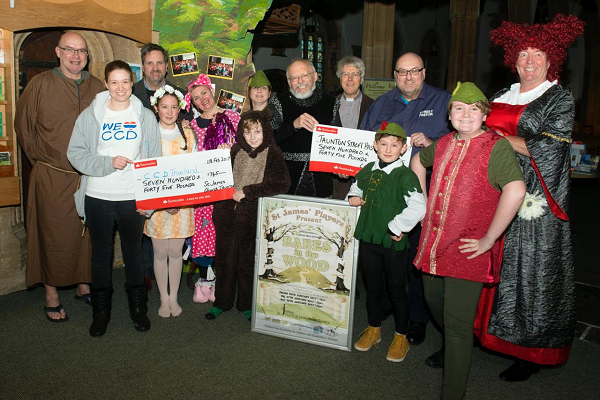 Members of St James’ Parish Church, Taunton, continued their biennial tradition of mounting a pantomime. Proceeds from the three nights’ performances of ‘Babes in the Wood‘ were shared by cast members between Taunton’s Street Pastors and Christian Care Foundation for Children with Disabilities in Thailand with each charity receiving £745.

St James’ Players producer Jenny Wakefield expressed her pleasure at the success of the fun venture,

“This is the fifth pantomime we’ve presented and, thanks to the generosity of the audiences each night, we are delighted to be able to benefit two worthy charities.

Given the focus of the play on the dastardly deeds of the Sheriff of Nottingham character and the desire of Robin Hood and his/her merry band to promote community well-being, it was the unanimous wish of the cast to encourage our friends at Taunton  Street Pastors who care, listen and help throughout the year.

The involvement of children and young people in the production also provided an incentive to benefit the work of the Christian Care Foundation for Children with Disabilities in Thailand (CCD) which has been providing care and support to abandoned children with disabilities, regardless of gender, nationality, creed or religion, since 1986.’

The panto saw the church transformed into Woodland and Castle precincts with strong performances by lead actors and supporting cast. All the traditional elements were included with Dame Daisy, Robin Hood and Maid Marian aided by their respective stooges and junior partners. A novel appearance by a Donald Trump lookalike at the end gave a topical twist and each audience entered fully in to the spirit of the occasion.