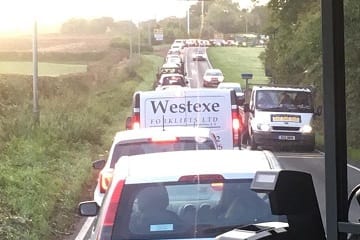 Commuters in Taunton travelling through Cross Keys can expect delays for the next 10 weeks.

Temporary lights have been added since yesterday (Oct 22nd) along the A358 at Cross Keys which is having a big knock on effect in all directions.

The works are part of BP and M&S as developers provide access to the new filling station next to the roundabout.

Currently you are unable to turn right at the Cross Keys roundabout if your coming from Minehead and head for Norton, you need to get to the next roundabout and double back on yourself which is causing extra frustrations and delays.

Commuters have been reporting added delays of over 1 hour 45 minutes to get from Bishop’s Lydeard to Musgrove Hospital. Another driver commented it took her over 45 mins to travel whats normally or 2 or 3 minute drive.

Cllr Mike Rigy has commented on Tone Fm social media that he is in contact with the Highways team to see if there is a less disruptive way the works can proceed.

The school bus for Taunton Academy was running an hour behind schedule because of the roadworks this morning.

Drivers are dreading trying to get home later today in the rush hour times according to our social media.