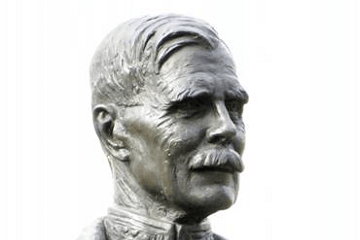 A Somerset man who founded the Royal Air Force and helped change the course of history will be remembered in his home county next week as part of the national RAF100 celebrations.

Hugh Montague Trenchard, the 1st Viscount Trenchard, is widely regarded as the Father of the RAF after being appointed the first Chief of the Air Staff when the RAF was formed in 1918.

However, it is less well known that he was born at Haines Hill in Taunton in 1873 and spent his childhood at Courtlands in Norton Fitzwarren.

A ceremony is being held on Thursday to celebrate this link and officially rename Taunton’s Northern Inner Distributor Road as Trenchard Way.

Hugh Trenchard, the 3rd Viscount Trenchard, will be guest of honour for the road naming and will unveil a new memorial to his grandfather.

He will be joined by local dignitaries and representatives from the Royal Air Force, Royal Air Force Association, Royal British Legion and other members of the Armed Forces community, along with Cadets from 41F (Taunton & District) Squadron Devon and Somerset Wing ATC.

“This will raise the profile of the Trenchard name and provide a permanent reminder for future generations of our link to the Royal Air Force. In many ways, this memorial is long overdue but I’m pleased we’ve been able to put this right in the RAF’s centenary year.”

Councillor John Williams, Leader of Taunton Deane Borough Council, said: “I am delighted that we are honouring such an eminent ‘son of Taunton’. The nation owes a huge debt to Hugh Trenchard for founding the RAF. I look forward to welcoming the current Lord Trenchard to our county town.”

Tom Mayberry, Chief Executive of the South West Heritage Trust, said: “Viscount Trenchard was a remarkable man who helped to change the course of Britain’s 20th century history. It’s very appropriate that he’s now being remembered in the town of his birth.”

A special talk by Tom Mayberry will also be held at the Museum of Somerset on the evening of Thursday 14th at 7.30pm.