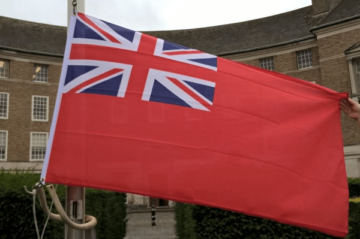 Somerset County Council is proudly joining a host of Local Authorities across the country in raising the Red Ensign flag to celebrate Merchant Navy Day.

Supporting a nationwide call from the Seafarers UK charity the UK Merchant Navy’s official flag, the Red Ensign, will be flying on public buildings and landmark flagstaffs across the land to mark Merchant Navy Day.

Cllr Christopher Le Hardy, Chair of Somerset Armed Forces Partnership, said: “Somerset County Council is proud and honoured to support Merchant Navy Day. By raising the flag today our seafarers are remembered. We depend on them to defend our shores, trade with other countries and import essential food and fuel. The job of a seafarer is therefore vital, but also demanding and hazardous with a much greater chance of injury than many other professions.”

The day aims to raise awareness of the UK’s on-going dependence on Merchant Navy seafarers, remember the sacrifices they made during wars where they incurred heavy losses whilst endeavouring to supply the nation with valued goods – whilst celebrating the important work they continue to do.

As an ‘island nation’ the UK relies on Merchant Navy seafarers for 95 per cent of its imports, including half the food we eat. The UK has the largest ports industry in Europe, with 75 per cent of our exports shipped from UK ports.

It is hoped that Merchant Navy Day, 3 September, becomes a celebrated annual event with Local Authorities and public buildings across the land paying thanks to seafarers on this day.