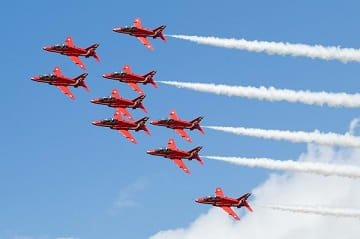 The world-renowned Royal Air Force Aerobatic Team, the Red Arrows, will be performing one of their very last UK displays of the year at The Royal Navy International Air Day at RNAS Yeovilton on Saturday 13 July.

The team deploys to North America for its Western Hawk 19 tour in late July, so opportunities to see their impeccable blend of formation and opposition manoeuvres in the South West will be limited.

Joining the Red Arrows will be the RAF Typhoon Display Team, demonstrating their power and agility as they ‘bring the noise’ to the show. This outstanding multirole combat aircraft will once again be put through its very capable paces in a tight and dynamic display over the Somerset sky.

The Air Day will also be welcoming back The Royal Air Force Battle of Britain Memorial Flight’s Avro Lancaster bomber – one of just two airworthy in the world – plus a Spitfire and Hurricane to make up the Flight’s classic three-aircraft formation. The Spitfire’s participation is especially significant given the type’s involvement in D-Day, 75 years ago.

The RAF Tucano Display Team returns to the airshow circuit before the type retires this October after 30 years of service. Used by both RAF and Royal Navy fast jet trainee pilots, this will be the last opportunity to see this outstanding basic trainer’s smooth aerobatic performance and hear its unmistakable turboprop whine at RNAS Yeovilton.

These displays will be part of the action-packed five hour flying display whilst on the ground there will be a vast range of attractions from the latest defence technology exhibitions, engineering fairs and service displays to trade stalls, arena displays, military bands and the chance to meet the pilots and even sit in the cockpit!

Further information and discounted advance tickets (Adult £28, Child U16 £5 and Child U5 Free) available at www.royalnavy.mod.uk/airday.