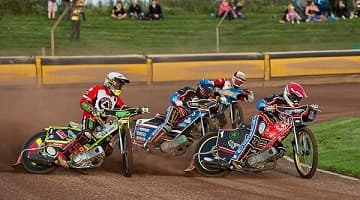 The ‘Cases’ Somerset Rebels showed no mercy on a depleted Belle Vue side, who arrived at the Oaktree Arena minus the injured Max Fricke, added to which Rohan Tungate withdrew from the Aces team before the match had even started, a legacy of a leg injury he sustained the previous night.

With two wins over the Mancunian club already this year, the Rebels were looking to that brace into a hat-trick, and did so with comparative ease, Somerset opening up a 12-point lead before the first third of the match had been completed, an onslaught from which Belle Vue never really recovered.

Any faint hopes the visitors might have held of clawing themselves back into the match virtually disappeared when their double-point tactical ride saw Craig Cook finish behind the Somerset duo of Allen and Grajczonek, and such was Somerset’s domination over the beleaguered Aces they had the match sewn up with 4 heats to spare, Jake Allen’s third race win of the night in heat 15 rounded off what had been a superb all-round team performance by the Rebels, their win moving them up to 6th place in the SGB Premiership league table.

“This was another excellent all-round team performance by the Somerset boys,” said Rebels team manager Garry May afterwards, “and although people will say that Belle Vue were at an obvious disadvantage having Rohan [Tungate] pull out prior to the start of the match, we still had to go out there and do the business, and the boys did that in a thoroughly professional manner.”

“After such a long break since our last home match, I know that the team were itching to get back out on home shale and put in a good performance in front of our own fans, and they certainly did that in style tonight!”