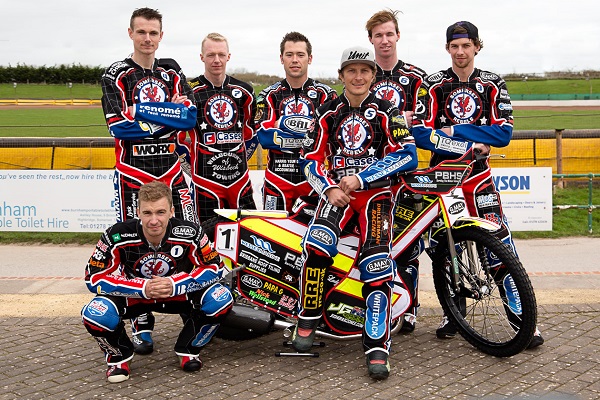 The ‘Cases’ Somerset Rebels management have reacted to a disappointing start to their debut season in British Speedway’s top-flight, which has seen them lose their last three home matches and culminated in their recent 34-point defeat at Wolverhampton, by making three team changes.

The Somerset promotion have signed Richard Lawson, Lewis Kerr and Cameron Heeps to replace the out-going trio of Rohan Tungate, Paul Starke and Jan Graversen, and, subject to BSPA approval, the changes will be effective in time for Somerset’s next match, at home to Rye House on Friday 19th May.

“It is never nice to tell riders that they are being released, but we had to do something quickly while we still had the chance in order to try and turn our season around,” said Somerset team manager Garry May.

“For whatever reason, things just haven’t happened for Rohan and Paul, and while Jan has steadily improved as the season has progressed I just felt that we needed greater consistency at reserve so that there was less pressure on Jake Allen.”

“Both Rohan and Paul have been great servants of the Rebels, none more so than last season when we won the league championship, but I have to do what I think is best for the club before it gets too late.”

Cumbrian Lawson is currently a member SGB Championship side Glasgow Tigers, with whom he won a KO Cup Winners’ medal last season, and has had experience of riding in the top-flight in the UK, mainly with Lakeside, while Kerr has recently completed a temporary spell with Poole as an injury replacement, and Heeps, who also rides for Ipswich in the SGB Championship, is a multi Western Australian State Champion, and is currently enjoying an excellent season with the Witches.

The trio will all make their Somerset debuts in this Friday’s (19th) SGB Premiership league match at the Oaktree Arena against Rye House Rockets, the Hertfordshire side having also made the move up into UK speedway’s top-flight this season along with Somerset.

The Rockets have enjoyed a good start to their 2017 campaign, built on the back of an undefeated home record, though, they have yet to pick up any points on their travels, albeit that they have only ridden two matches to date away from their Hoddesdon home.

Rye House track an experienced heat-leader trio, with long-standing Rocket Edward Kennett at number 1, while Scott Nicholls and Chris Harris can boast a total of 10 British Championship successes between them, the duo having represented the Rockets in the SGB Premiership Pairs championship staged at the Oaktree Arena at the end of March.

“Rye House will prove to be a good test for the new-look Somerset team,” said May, “but we are determined to get things back on-track results-wise to kick-start our season, and that the new boys will mark their Somerset debuts with a Rebels league win!”