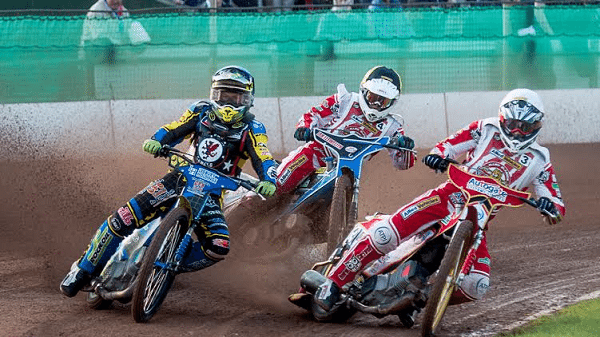 The ‘Cases’ Somerset Rebels booked their place in their 4th Premier League Championship Grand Final in 5 years with this aggregate win over Ipswich in the semi-final.

Going into the match holding a 16 point lead from last Friday’s home leg at the Oaktree Arena, the Rebels put in a text-book performance at Ipswich’s Foxhall Stadium by keeping things tight in the early heats to deny the Witches any sort of foothold in the match with which to build up any momentum and ‘eat into’ Somerset’s 1st leg lead, to the extent that by the time the match was entering its final third, Ipswich had only clawed back 4 points on the Rebels.

Despite this, there was no let up by a now rampant Somerset septet and with Ipswich now a totally demoralised outfit, the Rebels capped a supreme performance by taking victory on the night 49-41, to the delight of the small band of Somerset fans who had made the long trek to Suffolk to support the team.

“I know I probably sound like a broken record when I say that this was another tremendous all-round team performance, but that is exactly what is was,” said Somerset team manager Garry May afterwards.

“We had a game plan to keep things tight early on to deny Ipswich the chance to get a foothold in the match, and the plan worked a treat.”

“Once we got to the halfway stage with Ipswich having made little impression on our first leg lead, you could see the belief drain away from their riders, and with them a virtually beaten side, we hit them hard over the final six heats to cap a brilliant night by taking the meeting victory as well as booking our place in the Championship Grand Final.”

“On behalf of the boys, I would like to thank the small, but very dedicated band of Somerset fans who made the long trip up to support the team, you were our ‘eighth rider’ tonight, and the boys really appreciated it….including the barrage toilet rolls at the end when on our victory lap!”