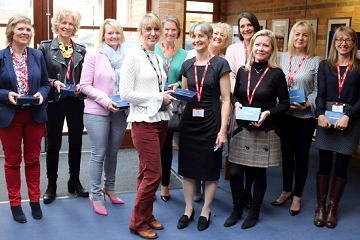 A day of celebrations took place at Queen’s College on Saturday (April 28th) to mark 40 years of co-education at the independent school.

The gathering included ten of the first girl students – including the very first, Catherine Hubbard – while eight of those present were from the first main cohort, joining in the 1977-78 school year.

The guests were welcomed in the Queen’s Hall by Head Teacher, Dr Lorraine Earps, who said she felt a kinship with those present having been appointed as the first female Head in the school’s history.

Dr Earps said Queen’s was unusual among independent boys schools that had turned co-educational as it now had a 50-50 split of boys and girls across all age groups whereas many still had many more boys than girls.

“We want to produce strong women and good men,” she added. “That is our aim and I believe we are very successful in doing this at Queen’s.”

Entertainment followed by two current students, talented pianists Rachel Lui and Jessica Chan and, after a buffet lunch, Dr Earps presented Queen’s College pendants to the first girls in attendance before a tour of the school guided by OQA Secretary, Mr Geoff Bisson.

The guests were able to see demonstrations by students in subjects such as Food Technology and Design Technology.

Other current students were been able to hear from two Old Queenians – Dunya Aksentijevic and Flo Broderick.

Dunya is a heart researcher at Queen Mary University of London, while Flo travels worldwide working for a New York-based software company.

The next major event at Queen’s College is the Whole School (0-18 years) Open Morning this Bank Holiday Monday – to register attendance please email admissions@queenscollege.org.uk or call 01823 340830.