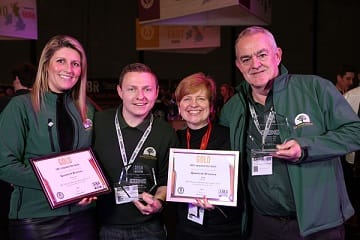 A Taunton based brewery is celebrating after a double win at a prestigious national awards evening.

Quantock Brewery took home Gold in the Cask session IPAs for QPA and Gold in the Keg premium PAs for Titanium
at the SIBA National Independent Beer Awards, which took place at BeerX in Liverpool last week.

Ian Fozard, SIBA Chairman said; “Judges had a tough job separating the pack as the standard was extremely high once again. The winners from the SIBA competition are officially the best independent craft beers in the UK, something brewers should be extremely proud of.”

Cheryl Ford, MD from Quantock told us; “It means a huge amount to win these awards amongst so many other fantastic breweries where the standard is so high, so to get 2 golds is a massive achievement and our team are absolutely over the moon.”

“We pack heaps of hop flavor and aroma in to these beers along with a complex recipe of malts which contribute to the final product.”

Quantock Brewery was set up in December 2007 in Wellington Somerset. However it was born out of the love of brewing by head brewer Rob Rainey. He purchased his first home brew kit from Boots but when this didn’t produce the quality of beer he wanted, Rob, a former nuclear engineer, built his own kit from scratch, and the rest is history.

Rob’s philosophy was to brew the highest quality ales using the best natural ingredients. He wanted all the beers to be brewed entirely from the highest quality grain and whole hop cones, the only other ingredients being yeast and water. No chemicals or sugar are added to the beers to ensure flavour is pure. Rob stives to produce quality beers that have flavour and character, far different from the mass-produced beers traditional found in pubs across the UK.

In June 2015, due to continuing demand, Quantock Brewery stepped up to a larger facility in Bishops Lydeard, Somerset, alongside the southern terminus of the West Somerset Railway. The new site allowed us not only to produce more beer but in August 2015 to open our brewery shop and in May 2016 we also opened our taproom to the public, this means anyone can try our beers before they buy and it also allows us to hold events of all sizes from live music on a Saturday night to 3-day ale festivals.

In February 2017, Quantock Ales was invigorated with a massive investment that enabled our team and our new investors to continue brewing our much-loved traditional range of ales whilst also pushing forward to produce new and exciting beers. This coming together of new and old brought about our modern range of craft, hop lead style beers, including our high-in-demand QPA and Titanium.

Quantock brewery is a CAMRA and SIBA accredited microbrewery. To find out more about SIBA’s Independent Beer Awards visit www.siba.co.uk.