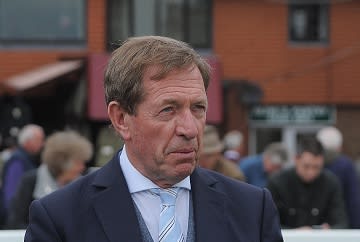 Taunton Racecourse hosts the inaugural running of the Portman Cup on Saturday January 19th when the first of seven races on the card, boasting a whopping prize fund of £106k, goes to post at 1.10pm.

In addition to the high class National Hunt action on the track Derek “Tommo” Thompson – the Channel 4 “Voice of Racing” will be on hand to add to the afternoon’s entertainment.

First up is the Sunday Lunch with ‘Tommo’ and ‘Champ’ Handicap Hurdle over two miles and about three furlongs.

This is followed half an hour later by The Elizabeth Day Supporting Injured Jockeys Fund Novices’ Hurdle Race, over a distance of two miles and about half a furlong.  Elizabeth Day is a local equine artist who exhibits at Taunton Racecourse and has raised over £1100 for the IJF through a raffle by offering to paint the winner’s horse or pet.

Next to post at 2.15pm is The British EBF ‘National Hunt’ Novices’ Hurdle Race over two miles and three furlongs.

The big event of the day is the first ever running of The Weatherby’s Portman Cup Steeple Chase (Class 2) over three miles and about four and a half furlongs which has a massive £50k up for grabs in prizes.  The trophy will be presented to the winning connections by the Honourable Mrs Rosemary Pease, the daughter of Lord Portman who donated the land on which Taunton Racecourse now stands.

The penultimate action is The Foresters Garden Buildings Chase, half an hour later over two miles, which has £10,800 available in prizes. The afternoon concludes at 4.25pm with The Free Ticket Offer Ends Midnight 27th January Mares Standard Open National Hunt Flat Race over two miles and about half a furlong.

Punters are reminded that they can take advantage of up to 33% off by purchasing tickets in advance on-line before 10am on the day prior to the meeting, by logging onto Taunton Racecourse.

A courtesy coach service departs from Taunton Railway Station two hours before the first race and returns from the course 30 minutes after the start of the last race.