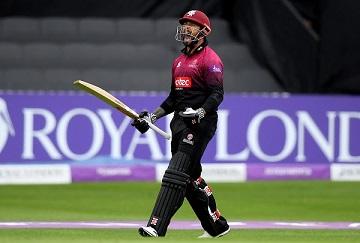 Somerset County Cricket Club have announced that Peter Trego will be leaving the Club at the end of the season.

The 38-year-old’s one-year white-ball contract expires this year and the decision has been taken not to renew the deal.

The all-rounder from Weston-super-Mare first appeared for the Somerset Second XI as a 16-year-old and went on to make his senior debut in a 40-over Sunday League game at Bath in June 2000.

He is Somerset’s second highest ever run scorer in T20 cricket with 3273 runs, whilst he has 50 wickets in the format for the County, he is also third in the Club’s all-time list of century makers in List A cricket having reached three-figures on no fewer than 10 occasions.

Somerset Director of Cricket, Andy Hurry said: “I’ve known Pete for a long time, and he will be remembered as one of Somerset Cricket’s great characters. He lived to play for the Club, and there is no doubt in anyone’s mind that he is Somerset through and through. This was never more evident than during our successful run in this year’s Royal London One-Day Cup, in which he played a major role. There are so many great memories of his contributions to the Club over the years and one I will never forget is his 54-ball century against Yorkshire to help us chase down 476 to win the Championship match at Taunton in 2009. At the time, Pete described that as ‘the innings of his life.”

“This year we have seen the emergence of several young players and this has meant that Pete’s opportunities in the First XI have been limited. He obviously wants to be playing First Team cricket, which is not something that we can guarantee him here at the moment, and therefore we feel that it is in both the Club’s and Pete’s best interests for him to consider other opportunities.”

“I would like to take this opportunity to thank Pete for his whole-hearted commitment to the Club during his time with us, and everyone associated with the Club wishes him the very best for the future.”

Peter Trego said: “I understand the Club’s desire to give younger players an opportunity, and whilst I’m no longer going to be a Somerset player, I will always be a Somerset fan.

“It’s been a long and fantastic journey. I’ve got so many wonderful memories, but that final one-day game at Lord’s has to stand out. Walking around the ground with the trophy and long-standing teammates such as Hildy was the icing on the cake of what’s been a great time in my life.”

“The positive memories that we’ve all shared together will stay with me forever. I’m not just talking about the players either. The support staff and everyone involved with the Club have been a big part of my life over the years. I’ve made friendships that will last a lifetime and hopefully I won’t ever be short of a golf partner!”

“The Members and supporters have been incredible, and I can’t thank them enough for the cheer they’ve given me every time I’ve walked out to bat. That will always be incredibly special to me.”