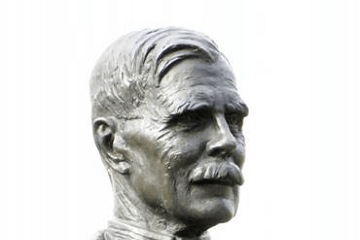 A permanent memorial to Hugh Montague Trenchard – the Taunton-born founder of the Royal Air Force – will be unveiled in the county town this year to mark the organisation’s centenary.

The 1st Viscount Trenchard, who is widely regarded as the Father of the RAF, was born at Haines Hill, Taunton, in 1873 and spent his childhood at Courtlands in Norton Fitzwarren. He went on to a distinguished military career and in 1918 he became the first Chief of the Air Staff when the Royal Air Force was formed.

The town’s Northern Inner Distributor Road will also be formally named Trenchard Way as part of the national RAF100 celebrations.

The new memorial will be positioned on Trenchard Way near Taunton Station at the gateway to the Firepool development site.

It will be unveiled on Thursday 14 June by Hugh Trenchard, the 3rd Viscount Trenchard and grandson of the RAF’s founder.

Councillor David Fothergill, Leader of Somerset County Council, said: “We’re immensely proud of our Somerset links to the origins of the RAF and this tribute to one of our most illustrious sons is long overdue.

“This memorial and road naming should raise the profile of the Trenchard name both in Taunton and beyond for generations to come and is a fitting way for us to celebrate the centenary of the RAF.

“This event has been planned for some time with the blessing of Lord Trenchard and I’m particularly pleased he will be attending to unveil the memorial.”

Councillor John Williams, Leader of Taunton Deane Borough Council, said: “I share Cllr Fothergill’s pride in our illustrious links to the formation of the Royal Air Force and it is fitting that this important road should be named Trenchard Way in honour of Lord Trenchard whose history we need to celebrate and raise awareness.

“We all have a duty to ensure the vast contribution of the RAF that has been made, to secure the peace that we now enjoy, is not forgotten and that the man that contributed so much was a Taunton man for whom we now provide this fitting honour.”

Tom Mayberry, Chief Executive of the South West Heritage Trust, said: “The Trenchards have deep roots in Somerset, and it’s excellent news that the family’s most famous son will now be honoured in the town of his birth. His Taunton childhood very much shaped his future life.”

On the evening of 14 June at 7.30pm, a special talk by Tom Mayberry will be held at the Museum of Somerset to celebrate Somerset’s links to the founding of the Royal Air Force.