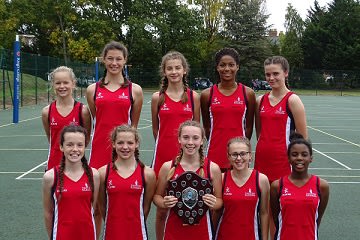 The Taunton School Under 14 team were crowned County Champions at the netball tournament last weekend, and will go on to represent Somerset at the Regional Finals in January.

The Taunton School U14 Netball Squad had an outstanding day of play on the Saturday, winning all four of their games convincingly against strong competition. They beat Haygrove, King’s Bruton and King’s College and finally Millfield in their fourth game with a score of 12-6.

Lisa Manley, Head of Netball at Taunton School said: “The hard work and training these girls put in at School has really paid off. Their attitude on and off the court is excellent, and we’re looking forward to a great day at the regional finals in January.”

The U16 Taunton School team narrowly missed out on a qualifying place for the Regional Finals, coming third in their group after winning two and losing two games.