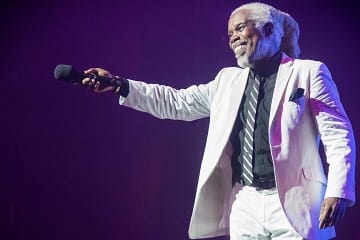 The Trinidad-born English recording artist, Billy Ocean, who had a string of internationally acclaimed hits in the 1970s and 1980s will be the main attraction on Saturday 14th July 2018 at Live in Somerset’s Party in the Park.

Billy Ocean has sold over 30 million records to date, including a host of gold and platinum records across the world – he hit the number one spot worldwide on numerous occasions.

The artist and songwriter who is best known for hits including Love Really Hurts Without You; Stop Me; and Love on Delivery, will be joined by special guests Hot Chocolate and The Real Thing.

Billy Ocean’s special guests Hot Chocolate, one of the UK’s most successful bands from the 1970s, will entertain fans with their distinctive sounds and classic hits, including: You Sexy Thing and Every 1’s a Winner, when they perform at Live in Somerset’s Party in the Park.

The Real Thing also joins the Saturday night line-up. Celebrating an incredible 40 years in the music business, three original vocalists – Chris and Eddie Amoo and Dave Smith – will perform with their own five piece band in a performance that will include You to Me Are Everything; Can’t Get By Without You and Feel the Force.

Billy Ocean is looking forward to performing at Party in the Park in Taunton. He said: “I love performing and sharing my hits with fans – I really hope they can join me for a night of live music under the stars in Taunton.”

Live in Somerset’s Party in the Park, is a three-evening outdoor music event (13th – 15th July 2018) being organised by LCC Live. The concert promoter has been behind many successful concerts in Taunton over the last few years including Rod Stewart, Status Quo, Jools Holland, Will Young and Scouting for Girls. The team is back, and this time has three evenings of sensational live music lined up.

Live in Somerset’s Party in the Park with Billy Ocean and guests Hot Chocolate and The Real Thing is the first of the three nights to be announced. Gates will open at 4pm, and concert-goers can choose from standing or seated tickets.

Les Kidger, Director of LCC Live, said: “We plan to create a festival atmosphere again in Vivary Park, enabling music fans to be entertained by a range of artists over the three evenings.

“Billy Ocean enjoyed phenomenal success in the 1970s and 1980s, as did Hot Chocolate and The Real Thing. So come and join us and take a trip down memory lane; enjoying, reminiscing and dancing to some truly iconic hits from over the years.”

Les added: “We’re delighted to be returning to Vivary Park for three evenings of live music, bringing around 20,000 fans to the local area over the course of the weekend.”

Tickets go on sale on Friday 15th December 2017 at 10am. There will be a limited number of early bird standing tickets for Saturday 14th July 2018 available priced at £30.00 for those who order tickets early (subject to availability). All tickets can be purchased from Ticketline: www.ticketline.co.uk; 0844 888 9991.