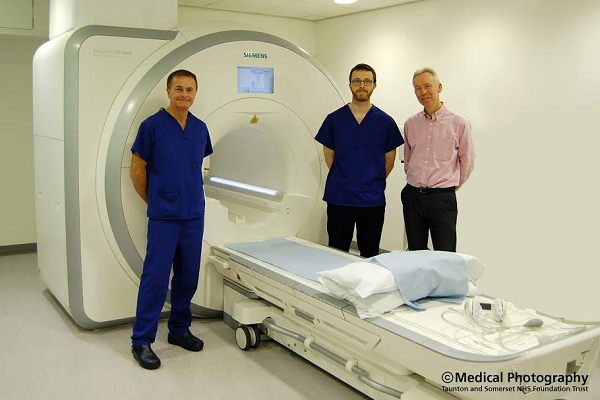 Consultants at Musgrove Park Hospital are taking a principal role in a study that has led to a breakthrough in the way prostate cancer is diagnosed.

The Prostate MRI Imaging Study (PROMIS) was run by 11 hospitals across England, including Musgrove Park, to test the accuracy of an MRI scan when diagnosing significant prostate cancer.

Currently, men who are suspected of having prostate cancer undergo an ultrasound guided biopsy of the prostate, which involves taking some tissue of the prostate with a small needle.

However, unlike for most other cancers, the procedure is only able to take parts of the tissue randomly and this leads to just under half of aggressive prostate cancers being found.

Now, results from the study show that by using an advanced MRI technique, consultants can detect 93 per cent of aggressive tumours, allowing more targeted biopsies to take place.

A total of 34 patients at Musgrove Park Hospital volunteered to take part in the study, as well as patients at the other ten hospitals.

Mr Nick Burns-Cox, a consultant urological surgeon at Musgrove Park Hospital who was involved in the study, said the findings will greatly improve the diagnosis of men with prostate cancer.

“The study showed that using an advanced MRI scan means we can increase the chance of a successful diagnosis from just under half to over 9 in 10 patients,” he said.

“Of the men who took part in the study we found that over 9 in 10 who did not have an abnormality on their MRI scan did not have prostate cancer. They therefore may be able to avoid an uncomfortable and invasive biopsy.

“This means about 40,000 men in the UK may be able to safely avoid having a biopsy.”

The MRI scan technique also identified a high number of serious and significant prostate cancers that were previously undetected.

“The study showed that nearly 20 per cent more significant prostate cancer was diagnosed, which would have previously been missed by the biopsy technique,” said Mr Burns-Cox.

“The earlier detection of more aggressive types of prostate cancer should lead to earlier treatment and a higher number of patients being successfully cured.

“Through our work in the study we have already been offering men an MRI scan prior to a biopsy where clinically appropriate.”

The study is now being considered by the National Institute for Health and Care Excellence, which will decide whether the advanced MRI technique should be rolled out across the NHS.