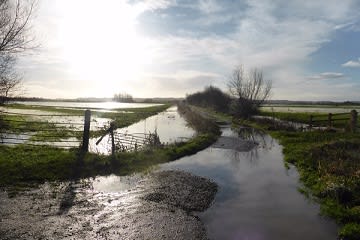 A Private Members’ Bill to help secure the future of Somerset Rivers Authority, and give local people more powers to tackle flooding, is making progress in Parliament.

After an hour-long debate in the House of Commons, the Somerton and Frome Conservative MP David Warburton’s Rivers Authorities and Land Drainage Bill passed its Second Reading stage, unopposed. The Bill will next be examined more closely by MPs in what is known as the Committee stage.

Mr Warburton opened the debate by reminding MPs of the devastating floods of 2013-14, when “100 million cubic metres of water covered Somerset’s otherwise green and pleasant land… Livelihoods really were driven to the brink, and people were understandably driven to despair.”

If Mr Warburton’s Bill makes it all the way through the House of Commons and House of Lords, there would then be a public consultation across Somerset, after which the SRA could be firmly established in law as a Flood Risk Management Authority with powers specially focused on Somerset. The SRA would be independently able to raise funds for its work through a share of council tax known as a precept.

Mr Warburton told the House: “A flood risk management authority would have duties and would, for the first time, be able to put its finances on a stable footing as a precepting body. The Bill includes additional safeguards for local tax payers, of course, and would allow the rivers authority to plan its water and flood management schemes into the future and thereby create a safer, more secure environment for us all.”

“David Warburton has had to be extremely persistent in getting matters to this stage, and everyone involved with the SRA is very grateful to him for his determination.

“In the debate, it was heartening to hear support from other MPs. Let’s hope that continues.”

North Devon MP Peter Heaton-Jones (Conservative) said in the debate that he looked upon Somerset “with envious eyes” because Mr Warburton’s Somerton and Frome constituency was covered by Somerset Rivers Authority.

Mr Heaton-Jones went on: “The SRA has done extraordinarily valuable work for his constituents, and householders and residents in the other constituencies across Somerset…  I particularly welcome my hon. Friend’s Bill and his contribution today, because it seeks to hark back to a time when we rightly had rivers authorities, which were doing work that is best done by local experts, local people – those who know the environment.”

Labour’s Shadow Minister for Flooding and Coastal Communities, Luke Pollard, MP for Plymouth Sutton and Devonport, said the Opposition thanked Mr Warburton for bringing the Rivers Authorities and Land Drainage Bill forward. It was “long overdue’ and rivers authorities would be “a good thing”.

Mr Pollard concluded: “We face unprecedented challenges in defending our lowland areas and coastal communities from flooding. The Bill is welcome, and it will help communities if local authorities use the powers. We need to look at how we can incentivise communities to get there, and we need a comprehensive plan for every community at risk of flooding. If we cannot get this Private Member’s Bill through Parliament, I encourage the Minister to ensure that the Government swiftly adopt the measures to make sure that communities that could benefit are not hindered by the fact that the Bill was not introduced in Government time.”

George Eustice, Conservative MP for Camborne and Redruth in Cornwall, and Minister of State at the Department for Environment, Food and Rural Affairs, congratulated David Warburton on bringing an “important Bill” forward. Mr Eustice recalled his own experience of Somerset flooding, and said: “The Government fully understand how important this issue is for the people of Somerset and fully support the work of the Somerset Rivers Authority… The Government fully support the Bill going to the next stage.”