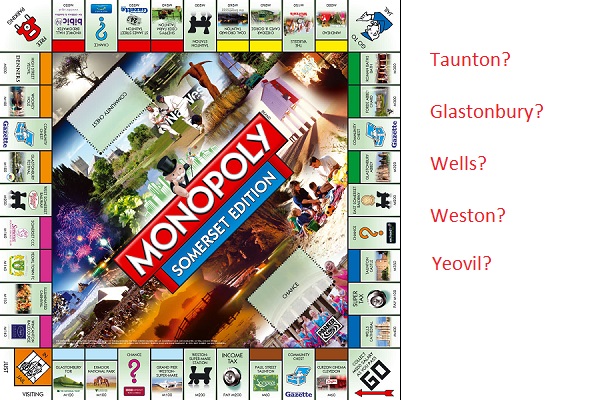 WINNING MOVES UK are searching for the first ever Somerset city or town to ‘Pass GO’ .. and be immortalised with its very own MONOPOLY game.

The public will get to decide which of five Somerset locations will ‘Pass GO’, over a two-month long consultation process.

The following ‘Fab Five’ have been shortlisted by WINNING MOVES UK – under official license from Hasbro – who will be making a game for one (just one) Somerset city or town following the county-wide search.

WINNING MOVES UK GAMES EXECUTIVES visited 12 places over a two-year period.  Now these five will go to a public vote, it is also announced.  Polls get underway from tomorrow. The five are:

The winning location is guaranteed to ‘Pass GO’ to land its very own MONOPOLY game, to appear on shop shelves later this year.

The place that emerges with the most “PRIDE” – say Winning Moves UK – will get their own board, which will see 22 customised property sites swapping places with the likes of Mayfair and Park Lane from the original MONOPOLY game.

So it means if Weston wins its famous Grand Pier could land on Mayfair. Or perhaps the public will take a ‘Chance’ and vote Taunton which could see its Racecourse appear on a Chance square. Or how about Glasto (the festival) appearing on one of the yellow ‘showbiz’ squares of Coventry Street, Leicester Square or Piccadilly from the London MONOPOLY original game.

“Each are extremely strong contenders,” says Natasha Rebuck, CUSTOM GAMES DEVELOPMENT EXECUTIVE at WINNING MOVES UK, who are making this official version of MONOPOLY under license from Hasbro.

“We originally began with a list of twelve, but have shortlisted these down to a ‘Fab Five’. Bridgwater and Wellington just missed out.

“The factors that will decide are two-fold. “Firstly the strength of popular feeling and pride for a particular place.

“Secondly, the diversity and beauty of potential landmarks to fill the board.”

“So it’s in effect a beauty contest – to borrow a celebrated MONOPOLY phrase – with the only difference being there is no prize for coming second, just first”.

The game will go into production to be ready in time for this Christmas (2017) and hit shop shelves this October.

An announcement of the winning location will be made soon after polls have closed, in spring (2017).